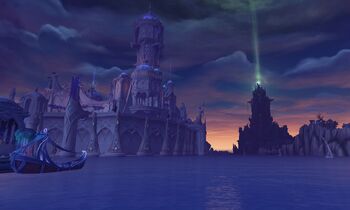 Suramar Bay, with the Nighthold visible to the left and the Tomb of Sargeras in the background to the right.

Suramar Bay is a large body of water found along the south coast of the region of Suramar in the Broken Isles. The bay serves as the structural foundation for the nightborne city of Suramar, which is built along its coastline as well as out into the bay itself. Directly opposite the bay sits the Broken Shore island chain, and the bay leads into, and is surrounded by, the Great Sea. It exists as one of the largest of its kind on the Broken Isles.

Bridges and other structures stretch across the bay, upon which a great deal of the city itself is built, including the Nighthold, Astravar Harbor, and the Evermoon Commons district. Were all structures intact, a series of bridges would have spanned the entirety of the bay and reach the temple of Elune on the opposite bank; the bridge extending from the Nighthold to the temple, however, was apparently destroyed with the raising of the city's shield.

The bay is consistently utilised by nightborne society, presumably for transport and recreational purposes, with Astravar Harbor housing a large number of the city's water-going vessels. Despite this, the nightborne maintain no war vessels to speak of in the bay, due to its relative isolation under Suramar's shield.

The bay was formed during the Great Sundering of the ancient continent of Kalimdor following the conclusion of the War of the Ancients. Just before the war's end and the ensuing sundering, however, Suramar City was enclosed by a powerful magical shield, which also eventually encapsulated a large portion of the bay. Thus, Suramar Bay (as it presumably became known) was cut off from the remainder of the world for over 10,000 years along with the nightborne race itself.

With the onset of the third invasion of the Burning Legion, the ancient shield around Suramar City was lifted, also reopening external access to the surrounding bay. During the resulting Nightfallen rebellion among the nightborne people, intense fighting began to break out in and around Suramar Bay, with the Nighthold (located far into the bay itself) acting as the primary objective of the Nightfallen insurgents and their allies.

As the conflict progressed, the bay was used for the transport of many commodities such as arcwine (and at times even live captives[1]) throughout Suramar City and beyond.