For the zone where the city is located, see Suramar. For the elven kingdom, see Suramar (kingdom).

"Ten thousand years ago, my city was radiant, the jewel of the night elf empire: Suramar.
Our people prospered for centuries, until the Legion came..."
—First Arcanist Thalyssra, reflecting on Suramar's past 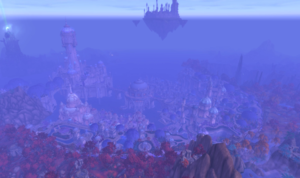 Suramar City[1] is an ancient night elven city and the current seat of power for the Nightborne civilization. Though not as glorious as the capital of Zin-Azshari, Suramar was nevertheless one of the largest and most important cities of the ancient Kaldorei Empire, which ruled over the majority of pre-Sundering Kalimdor. The city was notably home to several important night elves including the Stormrage twins, Illidan and Malfurion; priestess Tyrande Whisperwind; and siblings Maiev and Jarod Shadowsong.[2]

The city was heavily involved in the War of the Ancients, serving as the home of the powerful Moon Guard, and eventually being ravaged by the demons of the Burning Legion as they pushed back the Kaldorei Resistance. When the Legion attempted to create a second, large gateway in the city, the resident Highborne struck out and prevented it, proceeding to craft a powerful shield to preserve their city from further harm, through the creation of the Nightwell. During the ensuing Great Sundering which marked the conclusion of the war, much of Suramar was blasted to the depths of the Great Sea, although a sizable portion remained.[3]

For 10,000 years Suramar, now isolated on the Broken Isles and secured in the protection of its shield, remained cut off from the rest of the world; its residents gradually evolving into the Nightborne as a result of the Nightwell's energies. Upon the Burning Legion's return during their third attempt to invade Azeroth, however, the warlock Gul'dan threatened them with destruction unless they allied with the demons. In an attempt to preserve her city and her people Suramar's leader, Grand Magistrix Elisande, accepted the demons' ultimatum, lowering their ancient shield and allowing the Legion into the city.[4]

Now Suramar has become an unstable place, as the arrival of the Legion sparks dissent among many of its citizens. The city has subsequently become a focal point for much of the conflict that currently ravages the Broken Isles in the wake of the Burning Legion's invasion.

The Duskwatch are the primary body responsible for maintaining law and order in the city. 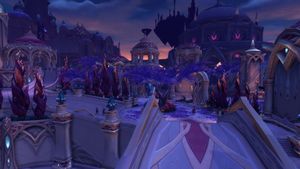 Bearing the same name as the region of Suramar, this ancient night elven city has endured for the last 10,000 years since the Sundering under the diligent stewardship of its night elven citizens, now known as the Nightborne. The city used to be protected by the Guard of Suramar.

At some point, Suramar gifted to its sister city Zin-Azshari the Javelins of Suramar, the most powerful weapons of the city, which could pierce any barrier, even one made by Queen Azshara herself.[5]

Just before the War of the Ancients, Broxigar was held captive in Suramar City until he was freed by Malfurion Stormrage. During the war, the Legion's efforts in the city were led by the pit lord Ronokon.[6] The city was attacked and ravaged by the Burning Legion. Suramar was subsequently used by the nathrezim in an experiment to create an army of the undead, an experiment which laid the groundwork for the Scourge ten thousand years later.[7] The Burning Legion attempted to open a second portal besides the one at the Well of Eternity in the Temple of Elune in order to attack the night elves on two fronts. The local Highborne and their leader Grand Magistrix Elisande, used the Pillars of Creation to close the portal and to put several seals on the temple.[8] The Wild God Ashamane battled Ronokon in Val'sharah just outside Suramar and sacrificed her life to kill him. In doing so, she was able to buy the elves the time they needed to craft a shield around their city.[6]

During the Sundering, the resident Highborne crafted a magical shield to protect a portion of their city from the destruction. They used the Eye of Aman'thul to create a powerful font of magical power called the Nightwell. For 10,000 years, the Highborne believed the world outside of Suramar City had been destroyed. These night elves would continue mastering and perfecting their art and over time evolve a little further into the nightborne.[9] While the city was shielded, it was "probably next to impossible for normal Nightborne to leave,"[10] unless by forced exile. 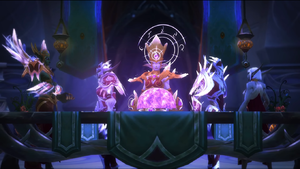 Suramar's ruling elite, with Grand Magistrix Elisande in the center.

When the city faced starvation, their source of power, the Nightwell, would become more than just a font for magical spells and works, it became the principal source of nourishment in place of the exhausted food supplies.[11] Over the long millennia of isolation, cut off from the land, the Nightborne would become addicted to the Nightwell, which in turn had a dire effect on those unable to access the nourishing energy produced from it in the form of Arcwine. Crimes in the city were punished by exile, and thus those exiled would suffer a horrible fate. The addictive effect withers the body without arcwine to sustain it, causing it to be unable to be sustained by anything but the energy provided in the Nightwell. Exile would deny any access to Arcwine and lead to starvation and deterioration leading to regression into Nightfallen and ultimately, the fully mindless state of the Withered.

At some point in time before the present day, a construct named the Arm of the Magistrix was conceived and built, the most powerful one ever attempted. The power it held in one pinky finger alone could level half of the palace.[12] It ended up raging out of control and decimated an entire district before it was successfully disabled, then was stored away somewhere.[13]

When alternate Gul'dan came to Azeroth, he ripped open the seals in place at the Tomb of Sargeras re-opening the gateway for the Legion to pour through. The barrier that had protected the city and its Nightborne citizens came down with the removal of the seals. The Nightborne would soon discover the fate of the exiles when Gul'dan issued an ultimatum to their leader of joining the Legion, or being destroyed. Seeing no choice, Grand Magistrix Elisande chose to join in hopes of using the nightwell, albeit in a very different way, to save her people. Those who oppose her are exiled and the fear of exile is being used to keep the rest of the populace in line.

A Nightborne resistance has formed composed of Nightborne and Nightfallen along with some night elven survivors from the surrounding regions. They wish to stir the populace into action and bring Elisande to justice in addition to driving out the Legion from their city. Heroes are enlisted in the effort and play a pivotal role in the zone's campaign which is ultimately to defeat Gul'dan and deny the Legion access to the powerful font of Arcane energy.

Prior to the Great Sundering, the city of Suramar was located in the mid-east of the ancient continent of Old Kalimdor. One of the greatest cities in the Kaldorei Empire, Suramar was almost certainly the largest east of the Well of Eternity and the capital of Zin-Azshari. In a more magical sense, the city was also strategically positioned on top of a series of ley lines, which were exploited to great effect and relied on heavily by the city's inhabitants before the creation of the Nightwell.

Following the Great Sundering which tore Old Kalimdor apart, Suramar City found itself isolated on a small landmass in the Great Sea. This landmass—the Broken Isles—was among several surviving pieces of ancient Kalimdor which now formed new continents in their own right. On the Broken Isles, Suramar occupies a central position, lying along its southern coastline.

In the wake of the War of the Ancients, Suramar City consists of a series of concentric layers extending from a short distance inland into Astravar Harbor. The outer layer, serving as the city's furthest point inland, is mostly composed of gardens, estates, and sporadic accommodation. The next and largest layer, on a lower tier to the first, comprises the vast majority of Suramar's residential and mercantile sectors, and is situated mostly on land, with parts extending into the bay. Finally, the very inner layer generally consists of the Nighthold (seat of the city's leaders) and several other gardens.

Laid out on two major tiers, Suramar is also divided into numerous distinct districts. Furthest inland (working northeastwards from the south) there is the Lunastre Estate, Grand Promenade, Menagerie, and Twilight Vineyards. The large lower, central area of the city is mainly divided into the Starcaller Retreat, Evermoon Commons, Concourse of Destiny, and Midnight Court districts. In the very center of the city lies Astravar Harbor, which also lies on the large bridge extending to the city's most detached area: the Nighthold. 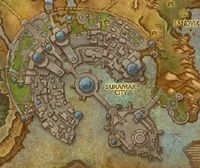 A map of the city

A detail map of the Court of Stars