For the lore of the zone and its status after the Cataclysm, see Swamp of Sorrows. For the Warcraft: Orcs & Humans Orc campaign mission of the same name, see The Swamps of Sorrow (WC1 Orc).

The Swamp of Sorrows (also once known as the Swamps of Sorrow) is a contested territory in the southern part of the Eastern Kingdoms. Among its murk-ridden marshes the green dragonspawn patrol at the behest of their dreaming mistress, Ysera. The great Dragon Aspect has warned of a lurking terror within the Temple of Atal'Hakkar, and her loyal servants are determined to protect the land from the emerging doom.

Far distant from civilization, the Swamp of Sorrows is a stagnant marshland of sucking bogs and weeping trees. The ocean seeps into the fen, making the water brackish and ideal for alligators and crocolisks. Salt deposits encrust fallen logs and protruding rocks. Bog beasts slog through the interior. Despite these dangers, the Horde has taken advantage of the region's distance from Stormwind to establish a colony in the zone. A flight of green dragons guards the Lost Temple, or Temple of Atal'Hakkar, an ancient troll edifice that channels demonic energy and drives living creatures to madness and violence.[2]

Some draenei were led through the Dark Portal by a few unknown leaders with the hopes of finding a new life, and have settled in the Swamp Of Sorrows. Unfortunately, most of them were driven mad due to homesickness, and attack all on sight. They routinely send assassins and saboteurs against the orcs.

The orc outpost of Stonard, built during the First War and rebuilt under Thrall's rule, is the only civilized town in the swamp. It serves as a base for the Horde. While being rather isolated from other Horde settlements, it has gained new interest with the re-opening of the Dark Portal.

Most of the swamp is dominated by nature. Wild beasts like crocolisks and jaguars hunt for prey, and ancient bog beasts wander through the land. Aggressive murloc tribes populate the coast and nearby caves.

The Swamp of Sorrows stands on the eastern side of Azeroth, east of Deadwind Pass, north of the Blasted Lands and south of the Badlands. The only established foot route to it is through Duskwood, then Deadwind Pass, although it is also possible to gain entry from Redridge Mountains by climbing through the peaks south of Render's Valley.

Originally, the Swamp of Sorrows was the northern part of an enormous swampland called the Black Morass. After the fall of the Gurubashi Empire, a renegade faction of trolls, the Atal'ai, fled into the swamp and built a large temple, the Temple of Atal'Hakkar. Ysera of the green dragonflight learned of their evil plans, drowned the temple into the largest bog, and sent several members of her flight to guard the ruins.

Years later, in the southern part of the Morass, the Dark Portal was opened, and the Horde invaded the area. The orcs built two settlements and an outpost in the Swamp of Sorrows, respectively Rockard, Stonard and Kyross. These towns, and later Blackrock Spire farther north, were the Horde's main bases during the First War against the humans. During the war, Rockard and Kyross were destroyed and Stonard was severely damaged.

With the implosion of the Dark Portal during the Second War, the southern part of the morass was separated and transformed into the barren Blasted Lands. The implosion left some groups of draenei on Azeroth, forever changed by the disaster. Most of them went mad from homesickness and the separation from their land, transforming into the hostile Lost Ones. A small group of Broken exiles managed to escape that fate and struggle along.

The northern part of the Black Morass is now called the Swamp of Sorrows and the southern part is the Blasted Lands.

After the Warchief, Thrall, assumed command of the Horde, the old outpost of Stonard was rebuilt by the orcs to its former glory. Researchers have come to study and exploit ancient magical artifacts, as well as the abundant flora and fauna of the swamp.

Once a tribe of furbolgs stubbornly held its own against foul creatures invading the swamp. Unfortunately, they weren't able to hold out long. The tileset is called "Felwood".[3]

Alliance
From Darkshire, the player can head east through Deadwind Pass and into the swamp.

Neutral
Alternately for both factions, a player can jump off the Thandol Span (that separates the Wetlands from the Arathi Highlands) into the sea, swim east, then south along the mountainous, impenetrable coast, past the Badlands, Burning Steppes, and the Redridge Mountains through to the Swamp of Sorrows, and right up to the north end of the Misty Reed Strand. While it's a very long swim, there are no mobs to deal with (except those in the Wetlands or Arathi depending on how the player originally got to the span) until the player gets where they need to be to find the crawlers.
As another alternative, a player can climb a barely noticeable mountain pass (denoted by vegetation) south of Render's Valley in the Redridge Mountains, which is just smooth enough to climb, and at its end, an almost unnoticeable gap in the mountains to the west. The player has to be careful not to fall at the other side.

The swamp is aptly named, as water from the ocean estuary encrusts fallen logs and rocks with salt deposits. The road rises mere inches from the water, painstakingly built to allow travel through this wretched area. This stagnant land is made worse by the jaguars, the hulking bog beasts and the crocolisks, many-toothed beasts that lurk at the water’s edge waiting for travelers.[4]

The Swamp of Sorrows contains no raid dungeons or battlegrounds. The Temple of Atal'Hakkar (aka the Sunken Temple), an instanced dungeon for adventurers levels 50-56, can be found in the eastern part of the zone. Sorrowmurk, east of the Sunken Temple, is a micro-dungeon full of elite dragonspawn. The orc outpost, Stonard, can also be found in this zone, and is a Horde travel hub (their nearest one to the Dark Portal), and the location of the master alchemist trainer. Harborage is a small village of draenei broken, who deal with both the Horde and the Alliance.

Although the Alliance has no travel hub in this zone, both Darkshire and Nethergarde Keep are valuable alternatives as their locations lets one run to the Swamp without encountering any enemies on the way. 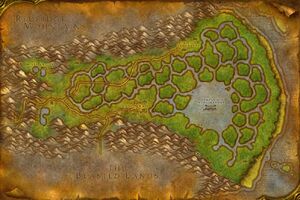 Map of Swamp of Sorrows

Swamp of Sorrows is home to several characters of note. At Stonard, Fel'zerul seeks aid in the battle against the Atal'ai. Near the entrance to the Blasted Lands, the Fallen Hero of the Horde attempts to cleanse the corruption that stems from a grand demon to the south. And southeast of Stonesplinter Junction, Watcher Biggs sends bold adventurers into the swamp in search of his lost shipment.

Quests in the Swamp of Sorrows are few and far between, stretched out across level 35-55. A few quests in this zone lead to the Temple of Atal'Hakkar, and so merit a visit. For the most part, however, this zone is seldom seen as a prime questing area.

The name Swamp of Sorrows is most likely an homage to The Neverending Story's The Swamp of Sadness, where Atreyu loses his horse Artax.