Swift Flight Form is a druid shapeshifting ability that increases flight speed by 280%.

Patch 3.0.3 added this ability to the list one can learn from druid trainers at level 71 without having completed the quest. The quest chain still requires level 70. The form itself costs 19 gold (plus the artisan riding skill fee). 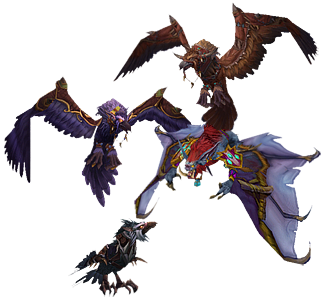 Swift Flight Form used to be rewarded by a quest chain, removed in patch 4.0.1. It required Artisan Riding to begin and started with the quest Morthis Whisperwing from Loganaar, the druid trainer in Moonglade. A reputation of Honored with the Lower City faction was required to enter (heroic) Sethekk Halls, a prerequisete for completing one of the last quests in the chain.

After you have defeated Anzu, you can talk to Morthis Whisperwing again to acquire an

[Essence-Infused Moonstone], which will be placed in your key ring (not your bags) forever. This will allow you to summon Anzu in (heroic) Sethekk Halls any time you like (for an extra badge or a chance to loot the raven mount).

A complete walkthrough is also available.

See Tips and tactics section of