For the Feat of Strength, see 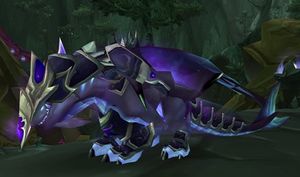 The Swift Nether Drake was a Season 1 Arena reward, awarded to members of the Arena teams that were in the 0.5% bracket of their battlegroup. These players also received the Gladiator title.

The mount increases flight speed by 310% (the fastest available) and ground speed by 100%.

The most aggressive nether drakes were awarded those heroes who showed significant prowess and commitment in the gladiatorial arena.

Qualifiers for this mount should also get the Feat of Strength