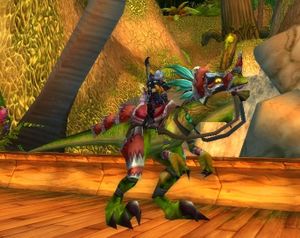 The Swift Razzashi Raptor was a rare drop from the boss Bloodlord Mandokir in Zul'Gurub. This mount could drop for either faction, making it quite popular for the Alliance. With the removal of Zul'Gurub as a raid instance in Patch 4.0.3a, this mount became no longer obtainable as a drop.

In Warlords of Draenor, it was added to the Black Market Auction House. It can be listed by Mei Francis for the opening bid of 20,000

The only known Razzashi Raptors were said to have been in the custody of Bloodlord Mandokir in Zul'Gurub. This species of raptor has not been seen in many years.