The Swift Windsteed is one of Pandaria's rarest and most majestic beasts.[1] Darting across the heavens on a silver cloud, it is said that good fortune will follow the rider. Sky-goat cavalry, mount up!

Unlike the mounts from the World of Warcraft Trading Card Game, this mount was directly purchasable from Blizzard. Released on January 8, 2013, it was the fourth mount to be offered in this way but was retired from the shop on January 19, 2019. 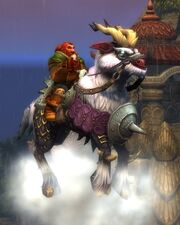 With the See You Later Bundle on December 20, 2019, this mount was available at a discounted price with other items. On January 19, 2019, the mount is no longer available for purchase as it entered hibernation in the Blizzard Archive.[2]

One of Pandaria's most elusive creatures, said to bring good fortune to its rider.

Cavort among the clouds on this wind-running wonder.

Ride like the wind - Charging from the heavens like a bolt from the blue, the Swift Windsteed gallops high over the battlefield, carrying you to the time and place of your next victory. Airborne cavalry, mount up!

Players are mailed this mount by Mei Francis:

It should come as no surprise that the mist-shrouded lands of Pandaria are host to a wild array of exotic beasts, a rare few of them suitable as mounts.

Behold, one of the very rarest and most majestic...