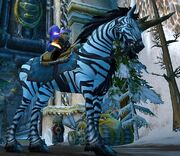 A gnome on a Swift Zhevra.

In patch 5.4.1, the Recruit-A-Friend program was updated to include a choice of one mount from all current and previous Recruit-A-Friend mounts, and one companion from Asian-only promotions.

Zhevras are rarely used as mounts in Azeroth due to their stubborn nature and tendency to bite.

The mount was mailed in-game to the selected character by Master Handler Sylvester. With the item is a rather unique letter:

- DO NOT OBSTRUCT AIR HOLES -