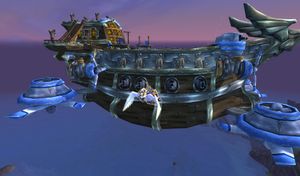 The gunship when leaving the character boost tutorial.

The Sword of Dawn is an Alliance gunship helmed by Admiral Walsh. Prior to the battle for the Broken Shore, it accompanied the third fleet and transported Alliance recruits and novice adventurers.

The gunship was used as a mobile training base, escorted by Alliance Gryphon Riders. Once it came close to the Broken Shore, it was attacked by forces of the Burning Legion. After defeating the ambushers, the troops were then sent to the battle below by using Armored Snowy Gryphons.

The gunship was later used in the same role of mobile training base, this time at the conflict near the Seething Shore. The gunship and its forces were attacked by Horde wind riders and paratroopers before disembarkation.

Later, the Sword of Dawn took part in the Battle for Stromgarde.

All the above in addition to 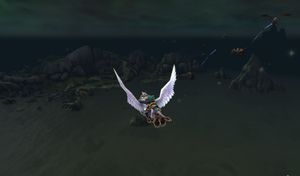 A novice adventurer flying away from the gunship after her training.