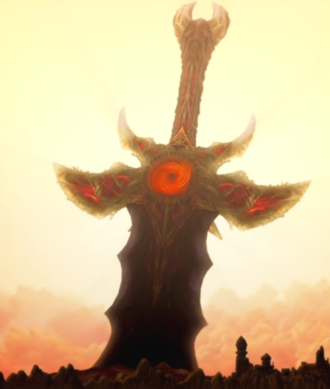 The sword plunged into Silithus.

The Sword of Sargeras[1] (or the dark blade of Sargeras)[2] is a weapon "crafted from hatred made manifest"[3] that the titan Sargeras used to impale Azeroth, gravely injuring its world-soul. It struck in Silithus, decimating the life and settlements in the region, which is now referred to as the Wound. This event damaged the titan spirit at the core of the planet, causing it to start bleeding Azerite all over the world. The Explorers' League didn't know how deep the sword goes and what Sargeras might have disturbed or awoken.[4]

The sword's magic emitted a dark-red aura, its energies seeping into Azeroth's heart like poison, until order champions drained the sword of its corruption with their artifact weapons serving as vessels for its vast power. The red glow subsided, and the sword went dormant.[5]

According to Pixni Rustbomb, the research about the silithid who survived the destruction of the land helped understand the power of Sargeras' sword.[6]