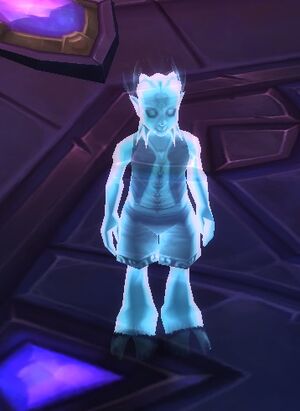 T'paartos as a young boy.

T'paartos is a draenei located aboard the Vindicaar as a new trainee in the Army of the Light. While undertaking the trials to become a Lightforged, he faced his memories and fears in the Forge of Aeons area.

As a child T'paartos lived near a marsh on Draenor where he was bullied for being fat and simple-minded. He would befriend animals such as frogs, elekk, and bugs, but never snakes. When he was scared he would hide in a cave, but on one situation ended up facing an angered earth elemental. He felt no one could hurt him if he remained alone.[1]

T'paartos raised an elekk named Ika when its mother was killed. As an adult he became stronger, but grew boastful of his strength (something he later found embarrassing). He never got over his fear of snakes, and still felt inadequate inside. He, however, faced many demons as a member of the Army of the Light.

As part of his trial to become Lightforged, T'paartos faced his memories and fears, striking down physical manifestations of them. It ended with him confronting T'paartos the Fallen, an image of his darkness who tempted him to leave the Light behind and embrace the fel. T'paartos, declaring that the Light had always been with him, slew his darkness and in the process became Lightforged.[1]

T'paartos can occasionally be seen departing the Vindicaar through the portal to Stormwind, shouting his own name as he does. 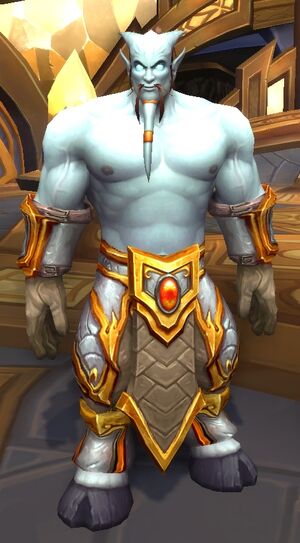