Tablets of the Earth (quest) 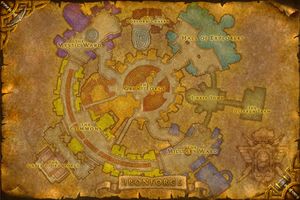 Bring the Tablets of the Earth to Advisor Belgrum in Ironforge.

Some time ago, Brann sent King Magni an urgent message from Ulduar. He said he'd found an ancient titan cache with mysterious and important relics. King Wrynn dispatched one of his fastest ships to Northrend to transport the courier. I was to meet him here and examine the tablets, but the courier is nowhere to be seen.

Magni is worried, <name>. I haven't heard anything about the courier's arrival. Would you be willing to travel to Stormwind Harbor and see if he's arrived?

Did you meet up with the courier?

Why would Twilight's Hammer take an interest in these tablets? Brann himself wrote that he hardly knows their significance, although he did mention something about becoming one with the earth. I will need to confer with my fellow Explorers' League scholars to decipher these as soon as possible.

Thank you, <name>. Without your aid, these tablets would've fallen into enemy hands.

This begins one of the Cataclysm prelude quest chains in phase two. Erunak offers it by the bank in Stormwind without any prerequisites. Pick up

[80] What's Shaking in Ironforge from an Earthen Ring Emissary before heading out.

by the waterline near the ship to Darnassus. Interact with him to start a script event!

You must help me safeguard the Tablets of Earth. The Twilight's Hammer will not stop until they've taken the tablets...

I'll help you defend the tablets.

After interacting with the crystal, players have access to the following abilities:

Three portals will open up around Tormun, one to the south, one to the west, and one to the north, each spawning a random elemental. Use the appropriate abilities on their respective elementals to quickly take them out, as they cannot be attacked normally. Tormun is busy defending himself—he will not cast any attacks on his own—so take out the attacking elementals.

Tormun drops the tablets on the ground. Loot them, then take the tram or fly to Ironforge. Belgrum is in the Library of the Hall of Explorers. Turn in, then run across Ironforge to the Commons, where Mylra awaits.

The tables you recover during this quest will eventually be used by Magni Bronzebeard to "become one with the earth" in an attempt to commune with Azeroth and find out what is causing the earthquakes, leading to his demise.