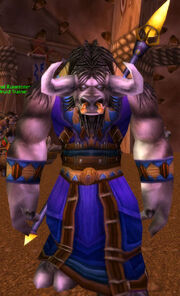 Tahu Sagewind is a powerful tauren Seer,[2] and the founder of the order of the priests of the sun, with Aponi Brightmane. He is found on Elder Rise in Thunder Bluff.

Tahu Sagewind was once a druid, but his philosophical discussions with his close friend Aponi Brightmane began to reveal a new path to him. As a druid, he was well aware of the sun and the moon as the eyes of the Earth Mother. The influence of the sun was lacking however, as the tauren druids followed the moon as taught by the night elves. This intense pondering led Tahu to create the first priests of the tauren, allowing them to channel the powers of the sun to aid their people.[3]

Following the creation of the sun priest order, Tahu is now a priest trainer.

After Dalaran relocated above the Broken Isles, Tahu Sagewind briefly appeared in the city, accompanying Orik Trueheart in his quest.

The Light protect you, <class>.

He may be related to Falla Sagewind and Hunter Sagewind.