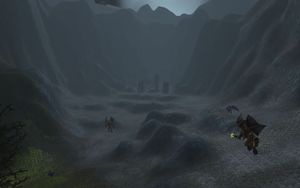 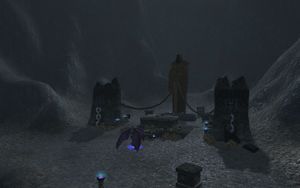 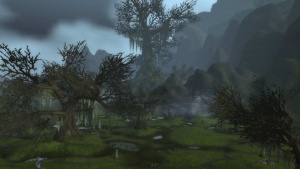 The Tainted Forest which consumed much of the scar.

The Tainted Scar is a small region in the western Blasted Lands that has a heavy demonic influence. Before Cataclysm the Scar was much larger.

The Tainted Scar was a large expanse in the Blasted Lands that served as a domain to many of the remaining forces of the Burning Legion that remained on Azeroth after the Third War. Another such group of demons remained in the similarly scorched and twisted Darkwhisper Gorge of Mount Hyjal. With their leaders gone and their forces diminished, they had no choice but to stand fast and wait for the Dark Portal to open once again. When the Dark Portal was opened some of the demons retreated into it, while others did not.

Following the Cataclysm, a group of worgen from Gilneas sailed to the southern point of the scar and built the settlement of Surwich. Due to the efforts of their druid leader, Marl Wormthorn, much of the scar was transformed into a forest. However the demonic energy in the region was too strong, and the forest became tainted.

While most of the scar has been taken over by the forest a small part of the area still remains intact. It is here an altar stands in which Daio the Decrepit preforms rituals with the demons. Occasionally Narixxus the Doombringer will appear behind the altar.

This area is covered with a thick, vile mist that chokes mortals stupid enough to venture close. Demons dwell here and pervert the already taxed land with their energies. Many people believe that Lord Kazzak of the Burning Legion resides in a tower hidden in the poisonous fog, but few have returned to give details.[1]

Gallery of the Scar prior to Cataclysm