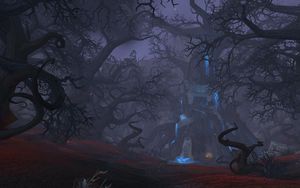 Tal'doren, also known as "the wild home", is located in the eastern section of the Blackwald in southern Gilneas. Long ago, the tree was home to Druids of the Pack[1] - who later became the original worgen - before they were imprisoned within the Emerald Dream, sleeping under a tree identical to this one, but not before their curse spread to others.[2]

During the invasion of Gilneas, Darius Crowley and other Gilnean worgen were here, along with the night elves Talran of the Wild, Vassandra Stormclaw, and Lyros Swiftwind. They were surrounded by feral worgen, whom Darius was capturing so that they could use the moonwells within Tal'doren to bring balance between human reason and wolf instinct.[3]

The Emerald Dream counterpart of this area is called Daral'nir.[4] According to Darius' words, while within Tal'doren, the mindless state of mindless worgen is temporarily soothed if they have not reached the final stages to the point that they cannot be saved.