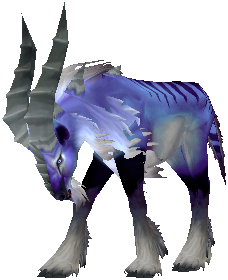 A Draenic talbuk as seen in a piece of Hearthstone artwork.

Talbuks are beautifully colored, striped, horned antelope-like creatures native to Argus.[1][2] Some talbuks fled Argus with the draenei aboard the Genedar.[3] On Draenor (later Outland), a world the Genedar crashed on, the alien species thrived, becoming a viable food source for the native predators and a part of orcish culture. Talbuks live primarily in the plains of Nagrand but could also be found in Shadowmoon Valley before its corruption. They usually congregate underneath trees, but some groups of them are seen wandering with their respective patriarchs.

Talbuks are a type of wild, stag-like creatures, and a favored food of the draenei.[4] The Moongraze Stags and Bucks of Azuremyst Isle reminded the draenei of the talbuks.

There is also a herd of talbuks living in the Stormspire's Eco-Dome. Talbuk does are non-aggressive beasts that alert surrounding males when attacked, while the decidedly more aggressive sires use their large hooves to stun attackers. When weakened, these talbuk can be tagged for Aurine Moonblaze, a druid sent by the Cenarion Expedition to investigate the Ethereal technology's effects on wildlife.

One breed of talbuk is known for its twelve prongs that are sharp and dangerous. They were hunted for the orcish om'riggor ritual.[5] Most talbuk are peaceful creatures that will only attack when they are defending their herd.[6] Despite their docile nature, talbuks have been known to gore seasoned warriors to death when threatened.[7]

Talbuks became sickly and corrupt as a result of Draenor's fel corruption and subsequent transformation into Outland.[8]

They grow their horns to full size at an early age.[9]

Having had to adapt to the new landscape of the ravaged planet they inhabit, the talbuks of Argus have evolved chitinous plates.[2] The surviving Krokul use them as mounts. 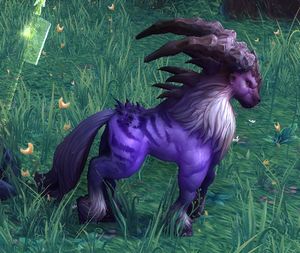 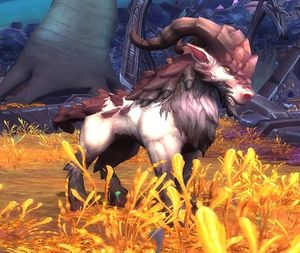 There are also Dark Riding and Dark War Talbuks from the Halaa merchants which cost Halaa Battle Tokens and Halaa Research Tokens to purchase.

[Young Talbuk] has a chance to drop from

Talbuks are tamable since patch 6.0.2. As hunter pets, they are classified as stags.