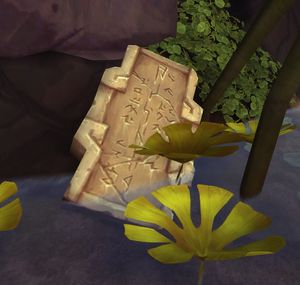 Tales of de Loa: Akunda is a tablet lying in the central pool of Whistlebloom Oasis in Vol'dun.[42, 62]

It contains a tale of the loa Akunda.

After having been interacted with, it can be found in the Hall of Chroniclers in Dazar'alor.


One day he hits with all de force,
De next day he be kind.
Much like Akunda's touch,
Dere be great power in his mind.


When ya courage goes astray,
When doubt be in ya heart.
Think of calm before de storm,
And Akunda do his part.