I've merged King Anasterian into this article, except for the following information.

If Anasterian is Dath'remar's son, how long is the lifespan of high elves? I am to assume that Dath'remar, who was a night elf for most of his life, lived longer than 2000 years? Somehow, considering the 2000 year lifespan, and 10,000 years since the distruction of the well of enternity, and 7,000 years of the kingdom of quel'thalas, 3 Generations of Sunstrider Royality does not seem to add up. Is it possible that the members of the Sunstrider Family are blessed with longer lifespans due to their amazing magical powers? Or is this a blizzard lore slip-up?
Somehow I expected more generations than (1) Dath'remar (2) Anasterian (3) Kael'thas. —The preceding unsigned comment was added by Tashu (talk · contr).

It is possible that high elves were immortal before the corruption of the Sunwell. The 2000 years refers to MODERN High Elves. --Theron the Just 08:59, 12 November 2006 (EST)

The encyclopedia, among other sources, says that they were mortal after leaving Kalimdor. The article does confirm that Anasterian was king during the Troll Wars, and a descendant of Dath'Remar.--Aeleas 12:24, 12 November 2006 (EST)

"they were mortal after leaving Kalimdor." I belive that this refers to time before the Sunwell had been created. Tichondrius said, "Beware. It is a pool of mystic energies from which the elves draw their immortal powers. They will not give it up easily". --Theron the Just 16:04, 12 November 2006 (EST)

An odd statement, certainly, and it's not quite clear what he meant by "immortal powers" -- note that it could be the powers that are immortal and not the elves themselves. It would be very odd for both the encyclopedia and History of Warcraft to specifically state that they lost their immortality, and then not mention that they got it back when describing the creation of the Sunwell a few paragraphs later.--Aeleas 19:48, 12 November 2006 (EST)

Night elves were only immortal because of Nordrassil; not even the Well of Eternity granted immortality. Azshara is described as the most loved monarch in Kaldorei history, which proves that there were other monarchs, who were not immortal. Hence, if the full Well couldn't grant immortality, how could the Sunwell? --Ragestorm (talk · contr) 17:54, 4 March 2007 (EST)

"if the full Well couldn't grant immortality, how could the Sunwell?" I wouldn't know, but I will not discount the possibility that they somehow did gain it, likely by enchanting the well's powers somehow. Regards, --Theron the Just 20:54, 12 June 2007 (UTC)

I think Anasterian could very possibly be Dath'Remar's son, considering that the Troll Wars took place three thousand years before World of Warcraft; Anasterian was described as being king around that period and he reigned until the fall of Silvermoon. (Which leads to the question of how old Kael'thas is - or was, if you've had the pleasure of taking his head.) --Joshmaul (talk) 07:24, 31 July 2008 (UTC)

Whats this mention of this dead guys skull, and it apparently being key to fixing the sunwell or something like that, is there a source?, is this part of a quest?, an integral bit of lore that will separate the azerothian BE from Kael and his outlander scum? (sorry, as a guy with a high lvl BE I'm just fed up of my BE being labeled as evil, honestly, I don't even have mana tap on my quicklaunch bars!). I'de just like to know where this tit-bit comes from, because up to now as far as I am aware the sunwell is kaput, gone, finished, it has left the building, taken the first stage outta dodge. It would also bring up the question that if Kael had it, why he didn't just give it to the dragons to fix the sunwell and save the BE allot of trouble. So yeah, if this is an actual bit of legitimate lore, my bet is it will be integral in drawing a line between player BE's and outland BE's, mainly because when I read it I could emagine my BE guy thinking "WTF Kael you jerk, why don't you fix our sunwell??". Anyway yeah, a source would be nice to confirm that this isn't in fact just a random bit of non-lore.--Nurizeko

I guess Kael put a large amount of faith in Illidan (Gul'dan's skull is Illidan's faviourite momento) and was probably prepared to do anything to revive the Sunwell. I'm pretty sure he wouldn't go to the Dragons because Malygos being insane (or bent on killing mortal magi) wouldn't help him.

I thought it seemed a bit redundant to have the article say that he was the last High Elf king and the information box as well, so I changed the info box to just say "King of Quel'Thalas". I hope that's okay with everyone! - Aladara 17:12, 8 September 2007 (UTC)

Since when did he die??

It's too rash to think that Anasterian died when Silvermoon fell. (I know I have not read any of the books or played World Of Warcraft.) Just where does it say he dies??? --The last Alterac 06:19, 23 December 2007 (UTC)

It says so in Lands of Conflict I believe (cited in the article): one of the many lore books you haven't read. I suggest you stop asking stupid questions and challenging information cited by members who actually know something about the lore; and instead do a bit of much-needed research. --User:Vorbis/Sig 12:11, 23 December 2007 (UTC) 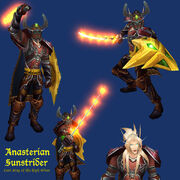 Was he a "Battle Mage" ?, i though he was "one of the magi who defended the sunwell" Anyways good art thoughUser:Eity

I'm mostly basing it on the fact that his helmet (that drops in the Sunwell) is plate, and paladin is pretty much excluded. Also, according to the page, he is assumed to be warrior or mage. This version is warrior, at least.

This is an old discussion, but I feel fairly confident in saying that he was a Warmage, as he's described in Arthas: Rise of the Lich King as having been a powerful warrior, and still being a powerful mage -- in addition to weilding a stave in one hand and a runeblade in the other. WoWWiki-Suzaku (talk) 06:16, September 2, 2009 (UTC)

would you please specify the npc ID in wowhead plz?

Anasterian is described as a warrior/mage hybrid, his use of plate, a sword as a weapon, and the mix between magic and physical damage leads me to think he is possibly an early version of a Spellbreaker. If so, is it possible that the blood elven Spell Breakers were inspired by their fallen king and used him as a model for developing their abilities? Which could actually make him the first Spell Breaker.--

I think it's pretty safe to assume that he was actually a warmage, based on his description in Rise of the Lich King. He dual-wielded a sword and a staff, just as in Samwise's illustration for the class. Spellbreakers, in contrast, carry a glaive and a shield, and are most known for their resistance to magical energies, which Anasterian did not display.

If he was so powerful...

How come if he was so powerful with his warrior/mage fusion Arthas didn't bother resurrecting him. And whats up with his sword, it got shattered, then reforged, then dueled Arthas agian without shattering and it is not on the Eye or Magisters Terrace loot table. —The preceding unsigned comment was added by Jubolt (talk · contr).

He's not necessarily some "Warrior/mage fusion." In Arthas: Rise of the Lich King, he was depicted more as a battle mage, which leans more towards magic-using than martial skill. Similar to Rhonin. And to Arthas, he probably was just another annoying high elf in the way. Felo'melorn was pretty much chalked up to being the fiery equal to Frostmourne. It probably was either sealed away somewhere by Kael, or Lor'themar is using it; lacking a unique in-game model/explanation. It didn't drop because Kael's final moments just weren't epic enough for it to drop. It'd've probably had to have been legendary, and those typically don't drop in 5-man instances. I mean, Blizz backed out of adding Frostmourne, and instead added a last minute, horrible rip off, Shadowmourne. We could only get the corrupt Ashbringer, but now we're unable to get even that. Atiesh was also removed, because Med'an was thrown in last minute to succeed Medivh and have it for himself. My personal thoughts, Anasterian would have been a better ICC boss than the Blood Queen they went for. Would've made more sense. But I'd have to agree with Blizz's decisions to quit giving any random hero who tears up some place an important piece of lore. Myrlen Midnightstar (talk) 21:48, 23 February 2011 (UTC)