Does anyone actually know the real life members of Lvl70ETC? I'm under the impression that it was made up of WarCraft programmers and Blizzard employees. For some reason, I always thought Samwise was the drummer. Anyone have any solid info on this? Yaki 20:11, 8 August 2007 (UTC)

Their in-game names give a hint at their real identities. For example, Samuro is a clear reference to Samwise Didier, one of Blizzard's most prominent artists, and the source of the Pandaren. I also believe that the bassist, Mai'Kyl may represent Mike Morhaime, the president and co-founder of Blizzard Entertainment. Besides, it really looks like him on live performances too, so I believe it has to be him. Dunno of the rest, tho... You can compare the images with their real faces in the videos. [1] Besides, shouldn't we add their real identities to this article, too? --Kulsprutejojjo 13:27, 11 August 2007 (UTC)

This is assuming its really them performing the music and not just them as a cover Milli Vanilli style. Watching the "Live" video linked above and the singer is most definitely lip syncing. --User:Mucke/sig 12:42, 22 August 2007 (UTC)

hehe I was just playing around in ModelViewer and found the whole band (this was some weeks ago) so I checked them out and then I just came up with this: Samuro must be Warrior... and Sig Nicious should be Paladin... Mai'Kyl, Shaman... Bergrisst, ???... Thunder-Skins, Hunter!

Except for Bergrisst. I've checked every item set in WoWModelViewer, and nothing matches to what he wears. Bard tier set, maybe? --Gordal (talk) 20:20, 16 July 2008 (UTC)

The Warcraft Lore needs to be split from the real-world name and pages. Remember we create specific pages for ingame content and names, that is seperate from real world content. I had split it previously for this reason but it appears someone merged the two again.Baggins 22:01, 1 December 2007 (UTC)

That is if they can be considered Lore, I mean it would be a bit silly, but hey Blizzard did worse ;). I still see them as an easter egg not officially a part yet. But that is just my take. Maybe wishfull thinking from my side hopeing that things won't get out of hand like that :P, so Maybe I'm not biased regarding that context.--Dehnus (talk) 20:00, 26 June 2008 (UTC)

Although, alot of the stuff on this page is probably true, much of it could be considered complete BS unless citations are given. --

Lvl70ETC Plays at 8 in the BlackRock Bar 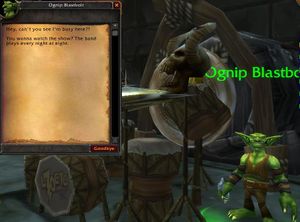 In-Game picture for Proof. They play in the Bar

Terran up the night, all right

*muffled sound of raging SCV motors* This is annoying, actually. I'd like a few people who were at Blizzcon 2007 to show me proof that the song as sung there, or at least more than two attendees that have seen the performance, because it appears as a lie today.--K ) (talk) 08:26, 31 July 2008 (UTC)

Haven't they played a song called Leeroy Jenkins ? If anybody gets information on this just post it. —The preceding unsigned comment was added by WoW HeadBangner (talk · contr).

Under speculation, it says they may be involved in quests sometime in the future. In the page though, it says that they are already involved in a Children's Week quest. I am not sure since I do not have a Horde character. Rolandius

As Horde you take the Horde Shattarath orphan to Silvermoon to see L80ETC (who are there atm) and she decides that she wants to be a rock star. interesting enough, though, the letter you get from the orphan, still says that she was adopted by Lady Lindarian to become a blood knight (so it seems that, lore wise, that is still the cannon ending for the quest chain, despite the quest-line change). --"The Scourge shall prevail!" - Scourge-Lord Morec (talk) 15:31, 13 January 2009 (UTC)

The article states that the band have renamed themselves "Level 80 Elite Tauren Chieftain".... has this actually been confirmed? The band's members as seen in Silvermoon City are still level 70... -StarLion (talk) 05:47, 17 February 2009 (UTC)

Where does it say Arthas was a member? I thought in the credits he was shown by himself playing a guitar. Rolandius

I just don't remember the connection between him playing a guitar and then being part of this band. I thought it was something put in just for fun. Rolandius

It is never told that he is part of the band actually. But I think it is in the article because he was playing the guitar meanwhile the song was playing and, as the same song is also played by this band, people presumed that Arthas was a former member of the band. Benitoperezgaldos (talk) 04:08, 29 June 2009 (UTC)

Okay. Well, I guess that indirectly could be seen as him being part of the band. Although, they are supposed to be made up of Horde members only, and besides that, Arthas would have killed his fellow musicians and turned them into Scourge or something similiar. Rolandius

Yeah, kinda weird. The only reason that I can think to keep it in the article is to maintain a neutral point of view as not any source has denied this (for more stupid than it looks). Benitoperezgaldos (talk) 04:40, 29 June 2009 (UTC)

Yeah. I guess he is a "presumed" former member. Rolandius

I was watching a live feed of Blizzcon '09, and they announced that they would now be called TAFKAL80ETC, probably because of the announcement of Cataclysm, and the new level cap of 85.

Yeah, it's a reference to Prince, although even if they were having bouts with record companies like Prince was, they would need to change their name anyway, and also, I said they would be called TAFKAL80ETC, not that their name was such.

Unless this has already been done, I think Blizzard should make other famous NPC's, such as King Varian Wrynn, Thrall, and Sylvanas, be able to respond to emotes like if someone does /rude, they do it back, and /bow, they bow back, and /flirt, they blush or blow a kiss. If this has already been done, sorry for being a noob. Premier Solivoda 11:08, 8 November 2009 (UTC)

In-game cinematics for the game Starcraft 2 during which its shown as an advert for their new album have revealed that they have renamed themselves to Level 800 Elite Tauren Chieftain.Kiingy (talk) 13:09, July 29, 2010 (UTC)

Hoof Hearted/Down with the Fed

These songs were listed on the Terran up the Night! album as "bonus tracks" but in the commercial that appears in Starcraft 2, it lists an entirely different set of tracks. I googled the song titles along with "tauren" and the wowwiki/wowpedia page was the only one that came up so I think somebody made it up and added it to the page. Please re-add these bonus tracks if you can find a source that says they exist. (Yes I know none of these tracks ACTUALLY exist anywhere, I mean if you see something official that says the fictitious album has them on it).Dr. Cheis (talk) 21:44, 27 October 2010 (UTC)