The chinese dragon model ingame is for a non combat pet, though it definatly would be interesting if the fel dragon used a similar model.Tweak the Whacked 13:35, 21 December 2007 (UTC)

Doesn't appear wowwiki has a page for it, least not that I can see on a quick glance, but I'm 89% sure I've seen a chinese dragon non combat pet in game. I assumed it was from the same source as the diablo and zergling pets.Tweak the Whacked 13:40, 21 December 2007 (UTC)

I havent seen such a thing ingame, the closest thing is the mana wyrmling but it is a manawyrm not the chinese dragon, plus animations indicate it is supposed to be a combat mob, oh and by chinese dragon i mean the model called netherdragon--Gurluas 13:42, 21 December 2007 (UTC)

Well as I've said, I can't confirm it. But it seems odd that the chinese dragon model would exist for so long and have full animations, unlike the Brutallus model that only recently appeared and has no animations, if they are for the same instance. Also, several non combat pets possess combat animations, and if you look at the size/proportions for the chinese dragon, it seems more like a small pet than a boss.Tweak the Whacked 13:48, 21 December 2007 (UTC)

I think you are speaking of two different creatures: 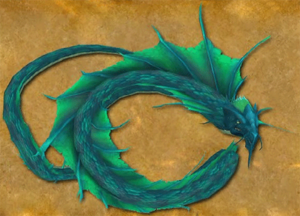 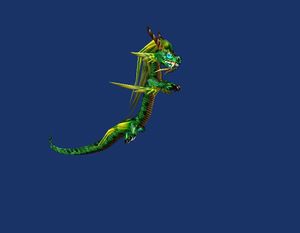 Yes, that is the creature I was refering to, Gurluas. Regardless, I'm very interested to see what this "fel dragon" actually looks like.Tweak the Whacked 13:56, 21 December 2007 (UTC) 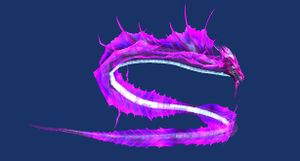 I think it will be this

Since we know Kalecgos is a fel dragon, I'm guessing they'll just take a regular dragon, touch it by giving it demonic features, and maybe different sounds.

I had assumed there was a difference between Kalecgos and fel dragons since a) they were listed separately, and b)Would be kind of lame to have two bosses without any real differences in the same instance(blizzard seems to be leaning away from that practice of late). Wouldn't surprise me if they just used a "demonic" version of the regular dragon model, though.Tweak the Whacked 21:46, 21 December 2007 (UTC)

"of late?" In molten core alone, Luciferon, Gehennas, Shazzrah, Harbinger, and Executus were ALL the same model. Magmadar, Garr, and Golemagg were all the same model as the trash of the instance. The only unique model was rags. BWL? Save chromaggus and nef, same story. If there are only two bosses in Sunwell that look the same blizzard's done fine by me! Istvan of Rexxar 13:18, 13 January 2008 (UTC)

Perhaps a greener smokey one like the felhound in Felwood? (compare to the hounds in Molten Core). Who said Kalecgos was the fel dragon? It says that there were "a fel dragon" and "kalecgos", unless my English is rotting by the lack of use. --

It's really kind of disappointing the model they used for the Fel Dragon. If you haven't seen it yet, it's essentially a frost wyrm, but replace the blue parts with green and the frost aura with fel fire. WTB less model recycling. --Adonzo 08:28, 11 February 2008 (UTC)

The proper name of this creature

Would the proper name of this creature be "fel frost wyrm"? Apparently the creature's name in the files is "felfrostwurm", and, besides looking like the typical frost wyrm, the only known one, Felmyst, is created from the body of a slain blue dragon. --Presea 18:22, 15 February 2008 (UTC)

indeed, but there is nothing "frosty" about Felmyst's attacks, which look to be primarily nature/poison based --Adonzo 11:01, 26 February 2008 (UTC)

It's only called "felfrostwurm" in the files, and that doesn't really mean anything. Wretched are called "crackelves", the Forsaken are called Scourge, Maiev is called "Miev", and there are a variety of other such 'errors'. She isn't a "frost wurm" at all in-game, using no ice-based attacks whatsoever. The only other mentioning of this 'species' is "fel dragon", and that's what we should probably go with. The name "felfrostwurm" is probably just the result of the modeler, I don't know, copying and pasting the frostwurm model directory and using it to create the model. Suzaku 00:40, 1 March 2008 (UTC)

The best name for this creature is Felmyst, because she is the only one of this "race". Sylvannas is also a unique kind of undead creature with a new model but we don't make a racepage for her "species"... --LemonBaby (talk) 18:03, 5 June 2012 (UTC)

Here is an archive. It is an unofficial translation of a Swedish magazine reworded as a Q&A, and there is also the question of if they were 'race' names or just descriptions, but it is where it came from, and all we had at the time.--SWM2448 20:07, 5 June 2012 (UTC)

Thank you! But M'uru is also called Dark Naaru and we changed that articles name as soon as his real name was revealed... I suggest redirecting this page to Felmyst until another one of his kind shows up...--LemonBaby (talk) 20:28, 5 June 2012 (UTC)

Is it possible that Frost Wyrms are created using the same Fel magic that created the fel dragon? If so, perhaps it should be included as speculation in either article.  Bill

Removal of Nightbane as a fel dragon

I removed this recently added addition for these reasons:

Whatever he might be considered, it's not a fel dragon.

Wow, I didn't even look at this discussion page before I asked if Nightbane was Fel dragon, and I know we haven't been given much lore about Fel energy back then, but I'd like to point out now that Fel is "created" by "sacrificing" life essence and Medivh sacrificed/weaved a part of his life essence into the fire spell he used to kill the dragon, so it's very likely that Nightbane was a Fel dragon. Perhaps being reanimated by demon blood isn't a prerequisite to be a Fel dragon and Fel Dragons simply contain Fel energy? Or perhaps it is, and there is a certain "thing" that makes a Fel dragon a Fel dragon, just like there is a certain "thing" that makes a Fel Imp different from a "normal" imp that simply contains Fel energy?VisionOfPerfection (talk) 02:41, 2 January 2015 (UTC)VisionOfPerfection

Is there any particular reason we're calling this just a "Fel Dragon"? If not, I think altering it to Fel Wyrm would be very appropriate given it's undead nature (and therefore similarities to the undead Frost Wyrms). --Morec; Undisputable Dictator of the Wowhead L&RP Forum! (talk) 04:04, 3 June 2014 (UTC)

I didn't quite get it when I previously posted, but "wyrm" in Frost Wyrm has nothing to do with them being undead. It has to do with their age at death. Frost Wyrms were dug up from ancient wyrmrest graveyards. Madrigosa was still very much alive and died prematurely, having not reached the wyrm stage of her life-cycle. Hence, she is a fel dragon. --Aquamonkeyeg (talk) 08:02, 3 June 2014 (UTC)

The branch corrupting Teldrassil might have had some demonic magic to it, but that doesn't mean that the Nightmare itself did, and especially doesn't make the Nightmare Dragons fel dragons. -- DarkTZeratul (talk) 20:36, 3 June 2015 (UTC)