The dwarven mountain king hero is randomized, its not always Aggronar the Mighty.Baggins 18:00, 9 September 2007 (UTC)

Image shows another of the random mountain king names that can appear in the level.

The Gilnean Brigade is made up of Gilneans from Silverpine Forest and primary from Pyrewood Village. Rimor Conscientia (talk) 05:56, July 25, 2010 (UTC)

Did Stromgarde send any troops? I know that Gilneas was probably the most solitary, but I have an easy time believing they had people who believed Jaina's message, and that she stopped there on her way to Kalimdor. Oakpack4 (talk) 01:22, July 27, 2010 (UTC)

Has it been stated any where that the Gilneas Brigade showing up in Legion has any connection to the one that went with Jaina? As far as I can tell the organizations merely share the same name. So it makes me think that we should have a Gilneas Brigade page for the Warcraft 3 faction and the World of Warcraft faction. What does everybody else think?--X59 (talk) 18:24, 13 December 2015 (UTC)

Good point. If that's the case then yes, it should be Gilneas Brigade (Warcraft III) and Gilneas Brigade for the Legion-stuff.--Mordecay (talk) 13:13, 17 January 2016 (UTC)

To avoid the WP:3RR, ShadowShade81413, why should Jaina be in the infobox when the current lore is known that Greymane is currently the leader. I am aware, from mutiple of other articles, that infoboxes tend to stay up to the date with the current lore. Jaina was leader during Warcraft III, in Legion (just around the corner) it is known that Greymane is the leader. — Surafbrov T / P / C 01:50, 6 April 2016 (UTC)

Simply put, there's no evidence the brigades are the same, that's why Mordecay removed the Legion tag he put up. Unless there's evidence they're related, the Legion brigade needs its own article. ShadowShade81413 (talk) 02:08, 6 April 2016 (UTC)
Jaina is the infobox because the Gilneas Brigade directly served her during the Third War and we don't know if there is an actual connection between the Brigade that Genn leads and the one from the Third War. After all they could be two different organizations that are just using the same name. --X59 (talk) 23:22, 6 April 2016 (UTC)
Agreed with Shade and X. --Mordecay (talk) 19:06, 7 April 2016 (UTC)

During the world quest Dogged Tenacity, they use the Gilnean-Alliance banner from Dalaran to mark their camp. Given that Greyfang Enclave is likely a Gilneas Brigade thing (Considering the NPC Lieutenant's information is what directly leads to Stormheim's events) should we put a picture of the banner in their infobox for the brigade? Seems pretty deliberate. 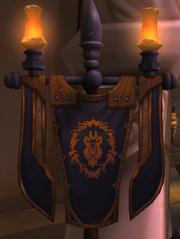