Information from The Last Guardian

A large chunk of the Horde was the conservative Bleeding Hollow clan. A powerful group with a long history of conquest, the clan was less powerful in that its aged leader, Kilrogg Deadeye, had become more unwilling to throw lives away in combat. Garona explained that in orcish politics, older orcs become more pragmatic, which is often mistaken for cowardice by the younger generation. Kilrogg had killed three of his sons and two grandsons already who thought they could rule the clan better.[1]

I think some of this information needs to be included in the article, mostly the part that he killed three of his sons and two grandsons. Zakolj 16:01, 25 November 2007 (UTC)

While reading this article, there seems to be some conflicting information. It tells us that Deadeye was rounded up in an internment camp, then goes on to says that he perished at the Battle of the Dark Portal. So, which one actually happened? Warchiefthrall 23:19, 15 January 2008 (UTC)

Oh thank you, Nice catch. The Bleeding Hollow were notroious for being the only clan to escape capture after the second war and marched back into Draenor, returning with trolls, dragons, etc...for all the clans still on draenor to use. They were part of Nerzhul later invasion. Alleria and her cadre of rangers dedicated themselves to hunting down the bleeding hollow clan after the second war. I'll fix the article.Warthok Talk Contribs 04:06, 16 January 2008 (UTC)

Investigated it more closely. The cited phrase was simply placed in the wrong section chronologicaly. It belonged after the events on Draenor. Fixed now.Warthok Talk Contribs 04:10, 16 January 2008 (UTC)

This one is actually kind of confusing, one source implies one history, and another source implies another. Horde Player's Guide says one thing about him, and I think earlier sources said something a bit different. It might help to put together the direct quotes.Baggins 23:11, 14 February 2008 (UTC)

Oh and warthok you made things worse the way you moved it around. Because if "his body was never found", he couldn't have "been rounded up with along with his clan to be put into an internment camp. That would still cause an 'impossibility' in the timeline.

Also remember, if there is some kind of conflict (which is quite common occurance unfortunately), we don't pick or choose one source over an another, we show both accounts. We do not ignore sources, or misinterpret the sources. If an explanation/commentary must be made to point out a possible conflict, it should be made between paragraphs, and italicized, but must remain neutral unbiased commentary, just pointing out where they differ.Baggins 23:29, 14 February 2008 (UTC)

Also I must point out that even if he was rounded up after second war, that doesn't mean he couldn't have escaped later to be involved in the events of Beyond the Dark Portal. It isn't necessarily a conflict. Although, it would mean that the first paragraph of the The Battle of Grim Batol account overlaps with time period and events occuring during BTDP up to the time period of DOTD.Baggins 23:37, 14 February 2008 (UTC)

Well, there is even more confusion... I went back and checked various timelines and even went back to Horde PLayer's Guide itself. While one section says he was thought to be killed, and his body was never found after the battle, elewhere in the book it says he escaped back to Azeroth just before the world was destroyed. Also I went back and looked at various timelines it seems that Day of the Dragon events occur after Beyond the Dark Portal's events. So this means that the info in Battle of Grim Batol had to be set after Beyond the Dark Portal. So if members of the Alliance thought he had been killed, and his body disappeared, then somehow he had escaped death, or was resurrected in order to be able to escape back to Azeroth, and then get captured into an Internment Camp.Baggins (talk) 23:40, 24 June 2008 (UTC)

I know we don't pick between sources here, but just between us here on the talk page i think we can go with the latest account from BotDP. I just don't see him being resurected. Not to meantion Rexxar and the Warsong would have seen him or his clan come through the portal. Aside from one or two orcs this wasn't the case, and they simply seemed to have merged into grom's group.Warthok Talk Contribs 00:06, 25 June 2008 (UTC)

Once the spoiler clause is lifted any info from the novel will be added to the article as well. However, yes it looks like there will be an issue between what was stated in the in-game books (and the rpg), and the novel. The RPG info was kinda self contradictory.Baggins (talk) 00:15, 25 June 2008 (UTC) 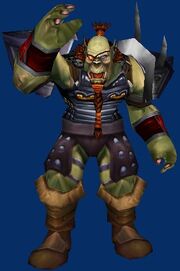 kilrogg in lord of the clans

Why is Kilrogg Deadeye in lord of the clans game when it is said that hes body was perished in WC2. Lord of the clans is after WC2.—The preceding unsigned comment was added by TheLichKingRisen (talk · contr).

Kilrogg was also the Horde's "cheat-death" character; when the game was in development, it was probably intended for him to have survived again, but then later decided to leave his fate unconfirmed. --Ragestorm (talk · contr) 20:09, 29 March 2008 (UTC)

Is it possible that the Bleeding Hollow Clan could have been captured and later escaped when they, Warsong Clan and Shattered Hand Clan invaded Azeroth for the artifacts for Ner'zhul? That way it could be possible for Kilrogg to perish against the Alliance forces at the Dark Portal on Draenor. The first paragraph of the Battle of Grim Batol could be seen as examples of past Horde clans that were difficult to capture.—The preceding unsigned comment was added by User:LoremasterWoW.

??? we know for a fact that the Bleeding Hollow fled back to Draenor, then guided the Warsong and Shattered Hand offensives back into Azeroth. There isn't really time for them to be captured and escape, particularly not the whole clan, complete with Kilrogg. That response only valid if I understood your query correctly. --Ragestorm (talk · contr) 22:56, 20 May 2008 (UTC)

I acknowledge "that the Bleeding Hollow Clan fled back to Draenor,then guided the Warsong and Shattered Hand offensives back into Azeroth." There is definately time for a clan to be captured and escaped/rescued, especially when a conflict takes place over a year. Zul'jin was captured and later rescued by the Horde in a mission in Warcraft II: Tides of Darkness. I didn't mean to imply that the whole clan escaped and/or had been rescued, but a majority of the clan could have escaped, including Kilrogg, to be recalled with the Warsong and Shattered Hand Clans. I also disagree with the notion Kilrogg is the "cheat death" character of Warcraft. He could be a reference to cunning military leaders who evaded capture (i.e. George Washington with the British). —The preceding unsigned comment was added by User:LoremasterWoW.

Has there ever been any info/lore on how he lost his right eye? I suppose it's a trivial detail, but it does seem to be from where he derives his surname, and he's always been depicted that way, even back in the Warcraft 2 days, and yet AFAIK the precise cause of his missing eye remains a mystery. LordaeronArkham (talk) 09:14, June 27, 2010 (UTC)

We absolutely do not need a screenshot of every scene from Lords of War; there are more screenshots from that single video in the gallery than every other source combined. -- Dark T Zeratul (talk) 00:29, 20 September 2014 (UTC)

The first manual mentions the first orcish attack on Stormwind Keep and it implies it happened at the very start of the war. The second manual then gives names of its leaders, Kilrogg and Cho'gall.

But the Last Guardian speaks about an attack on Stormwind which Garona associates with Kilrogg and the Twilight's Hammer clan (chapter 12). During this time we are in year 3 tho. --Mordecay (talk) 19:12, 6 May 2016 (UTC)