I may be expressing woeful ignorance here, but where's the source for the title? I wasn't aware of any distinct naming.--Hawki 09:03, 19 November 2007 (UTC)

I have a doubt. How is this series named? Right now, we have:

But the cover and the info at Richard A. Knaak's website makes me think this would be the correct one: 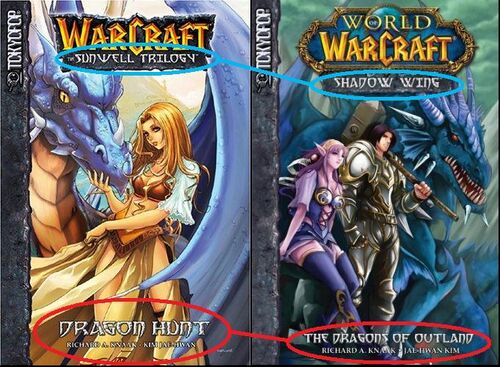 By looking on Knaak's site (here is the link in case anyone would want to know) and by comparing The Sunwell Trilogy with The Dragons of Outland, i think that the bame of the series must be Shadow Wing, and that volume 1 is The Dragons of Outland. Aedror42 (talk) 15:55, March 21, 2010 (UTC)
Edit: I've uploaded an image showing the cimparison between Sunwell and Shadow Wing. Aedror42 (talk) 18:47, March 21, 2010 (UTC)

Yep, that's it. Same for the other comics and manga with subtitle. Also, Knaak, in hiw website, has Shadow Wing as the section title, too.
Anyway, I sent him an email, asking about this. Hope he gets to answer, and we settle this without problems.--Lon-ami (talk) 18:55, March 21, 2010 (UTC)

It's that way everywhere, Amazon, Knaak's page, etc...I'd change it myself right now but articles can't be moved to pages that already exist, and swaping the text around is frowned upon. Need an admin to delete/switch/restore or however they do it. Any admins reading this?Warthok Talk Contribs 10:05, June 18, 2010 (UTC)

Just saw this. The related categories will be cleaned up/deleted, however the information on the related articles will have to be moved around by yourself. Also add a note somewhere that the trilogy was originally called Dragons of Outland but later changed to Shadow Wing. --g0urra[T҂C] 10:24, June 18, 2010 (UTC)