If you came here to discuss the wiki in general, please visit the Forums.

Previous discussions regarding the homepage can be found on Wowpedia talk:Main Page Dev.

Past discussions archived to...

Just thinking if the Warlords of Draenor portal can be made, can contain everything that was and is going to be added during this expansion. Just like the Mists of Pandaria portal. -- — Surafbrov T / P / C 21:01, 16 October 2014 (UTC)

Hello. I'm interested in creating a Polish version of Wowpedia, but I've read that I should contact an admin before doing anything. There already is a WoWWiki in Polish, but it's extremaly outdated and unsupported. I'm associated with an active WoW fansite where I could post some info about a new version of Wowpedia in the future, so finding a community shouldn't be a problem. I'm still unsure where to start, so any advice is appreciated. I can add that I've had some experience with translating WoW news and short stories before. I look forward to your reply. -- QuassRPG (talk) 02:33, 11 January 2015 (UTC)

Gamepedia has been making some videos (see https://www.youtube.com/watch?v=ChA8X_2HV1I for an example) relating to the lore of several Warcraft icons, and they plan to continue making more. I'd like to feature these videos to highlight specific articles in Wowpedia. What do you guys think? --PcjWowpedia admin (TDrop me a line!•C207,729 contributions and counting) 20:44, 19 February 2015 (UTC)

Sounds like a nice improvement to the featured media section.

A period after an image description?

Should there be a period after an image description? Wikipedia doesn't do it, but such cases are common on WoWPedia.--Adûnâi (talk) 01:42, 18 August 2015 (UTC)

I just started reading LiLi's Travel journal and to my surprise on the very first page LiLi mentions A philosophy called the wanderers way and that Chen has written alot about.

"Did you know" section

So I was just thinking that it might be neat to have a "Did you know" section on the main page listing various facts and trivia from different articles, like they have on Wikipedia or Wookieepedia. Currently, I think the main page tends to look a bit bland. For example:

And so on. Could maybe even have a "Quote of the day" or something similar. Not sure how to implement this, so it was just a thought/suggestion. --

Never clicked those other languages, but I can see now that you mention it, that several of them just leads back to gamepedia's main site yeah. PeterWind (talk) 02:43, 3 December 2015 (UTC)

Sorry, didn't see this question. We generally try to keep questions which aren't directed towards anyone on the Wowpedia:Village pump. To answer your question, most of the interwikis links are a remnant from before we split off from WoWWiki.

If you want a german version, first you have to create in this wiki traslated pages (like Illidan Stormrage/pt) and add them in the category DE Translation (for german version). I recommend you to start with NPCs. When there is enough traslated pages, you have to send a email to community@gamepedia.com in order to get the DE domain. --Kandooww ^^ (talk) 11:27, 15 January 2016 (UTC)

Some pages still have redirects to pages in languages that no longer have their own interwikis. Redirects such as ru:Шаблон:ЗеркалоОбновления/СтрокаО. Should the unused language redirects be removed or just be left alone in case somebody at some point starts up a new version for the "removed" language? PeterWind (talk) 16:34, 4 May 2016 (UTC)

Hello! Please can you help me? I'm a new player in WoW and I has Starter Edition, I want to check my mail but I can't. Do you know glitches to let me saw my mail? Please comment below if yes... Please! —The preceding unsigned comment was added by Drilera (talk · contr).

Neither the link to the WoW Gamepedia Leaderboard, nor the user's standing are currently visible on the user profile page. Is it intended or a bug?--Adûnâi (talk) 05:22, 18 May 2016 (UTC)

Update to the left menu

Hi guys! Since you've already changed the main page to reflect the Legion changes and created a Legion Portal, I just wanted to remember you to replace the WoD portal link with the Legion one in the left menu, under the Wowpedia Logo.

I feel like we should use a the year system that is given to us by the Warcraft: Chronicle

It seems like very little of the pages that describe events clearly state when events happen. While the in game lore does not give a date system Blizzard has given us Chronicle which has a year system similar to the one that the Star Wars fans use. The Opening of the Dark Portal/Warcraft I as year 0.

Seems like it would help make the lore more clear and easier to understand the scale. I submit the idea to add years to every page that needs them. TheLoneAcolyte (talk · contr) 08:00, 6 October 2016 (UTC)

We've already been using the BDP and ADP system for quite some time now. See the unofficial timeline. --

But it does not seem like we use it out side of that timeline. Would it be frown upon if I added years to posts I saw? TheLoneAcolyte (talk · contr) 8:15, 6 October 2016 (UTC)

One thing I know is that the official timeline isn't very popular among roleplayers because it condenses more than ten years of WoW events in about 5/6 years so the timeline is all messed up for people who "lived" through that IRL decade :( Xporc (talk) 09:16, 6 October 2016 (UTC)

Herbalism and First Aid seem to be missing from the list of Professions. Not sure why not and I would have added them if I had rights. --FatherZuke (talk) 23:03, 3 August 2017 (UTC)

Dark Iron dwarf and Mag'har orc should be added to the front page as they haven't been added yet. Mrforesttroll (talk) 17:16, 10 October 2018 (UTC)

What does this symbol mean? 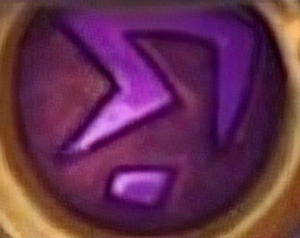 Does this symbol exist? —The preceding unsigned comment was added by Landate1 (talk · contr).

Nice find! This symbol should definitely be related to the Kirin Tor since the expansion has since been revealed as Rise of Shadows with Dalaran in the logo. — Surafbrov T / P / C 22:19, 14 March 2019 (UTC)

First Aid is still on the front page even though it was removed in 8.0. Shouldn't it be removed, or at the very least marked as no longer available (don't know how it would be shown with WoW: Classic coming out). Mrforesttroll (talk) 18:26, 24 March 2019 (UTC)

Obviously no one's talking about removing the First Aid pages entirely, but they definitely shouldn't be on the main page anymore. --DarkTZeratul (talk) 15:44, 25 March 2019 (UTC)

I want to create a guild and need to avoid requesting signatures from chars on different realms (I am on Eonar). Is there any way to just see chars my realm/server?

- and if anybody knows how to invite chars to a guild from other realms, please let me know.

Could the "Warcraft Universe" section be:

The Void elves are before Lightforged and Nightborne are before Highmountain in the character creation screen and should be that way on the front page. That is the order they are also in on other pages on Wowpedia. Mrforesttroll (talk) 17:58, 1 October 2019 (UTC)

I think in the Races area there should be seperate area for main races and allied races. In addition I would suggest to make them in collums of two for each faction , four collums in total and sort them by ABC. More so the title of "Races" should be a link to "Playable Races". (Yuvalal (talk) 16:57, 8 December 2019 (UTC))

here's a mockup i did, with the headers as links and the secondary professions moved to the bottom of the professions list. i may have fudged it a bit with the link color; i didn't want the hover underlines to be blue, so i just gave them the ClassLink class. not sure if that's undesirable
i'm also not sure how one would separate the allied races without it being confusing, since the races box is already organized by faction —Eithris (talk) 21:09, 8 December 2019 (UTC)

I would like to suggestion to place subtitles . "Main races" and "Allied races" and under each will be the races for each title. which can work with professions as well (primary and secandary. )(Yuvalal (talk) 16:22, 9 December 2019 (UTC))

here's an attempt at doing that. unfortunately, on my screen it's having unpleasant results with the spacing, since the two sections have different numbers of races. to be honest i have no idea if there'd be a way to fix that —Eithris (talk) 21:09, 15 December 2019 (UTC)

The one with Core Races and Allied Races is fine. Almost necessary, compared to what we have on live where all the races are dumped into one window. However, I would also order them alphabetically to make it easier to find a race. I think it was originally supposed to mimick the in-game creation screen, but this doesn't work because of various screen sizes changing the order anyway. -- — MyMindWontQuiet 20:44, 16 December 2019 (UTC)

The first one for me because it is spreading the horde and the alliance .At least his is my thought between these two. I think Pandaren should be at the bottum of the core races as it is nither alliance or horde race. (Yuvalal (talk) 14:52, 17 December 2019 (UTC))

Is there any way to revert back to the previous grey WoWPedia appearance? This new Hydra Dark skin makes the background pitch-black and impossible to edit. Why was it changed? The grey appearance was so perfect, changes only to the worse and much worse...--Adûnâi (talk) 01:41, 10 January 2020 (UTC)

Copy the code from User:Alayea/hydradark.css to your own: User:Adunaii/hydradark.css. That should restore the white background. — Surafbrov T / P / C 15:44, 10 January 2020 (UTC)

I noticed that under the Race section the allied race is properly linked to the allied race page but the core race is not linked. So I'm thinking that it should be fixed.--X59 (talk) 22:56, 13 May 2020 (UTC)