The cries of laughter upon seeing the tallstrider quickly turn to cries of pain.[1]

A tallstrider, plainstrider,[2] or simply strider is a large flightless bird native to Kalimdor, though they are also found in the Swamp of Sorrows, on Darkmoon Island and in Terokkar Forest.

Most species are neutral to adventurers, but a few are hostile.

According to Halga Bloodeye, tallstriders are gamey, flightless birds with thick skulls. Their brains are no larger than an orc woman's knuckle, and they are too dim to get out of the way of moving carts. She suspects that the quilboar of the Barrens often intentionally frighten flocks of them into the path of Horde caravans just prior to an ambush.[3] A tallstrider's speed on open ground is unrivaled, so predators rely on stealth and pack tactics when hunting them.[4] 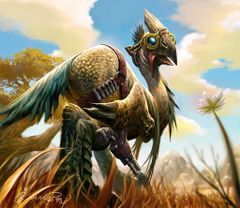 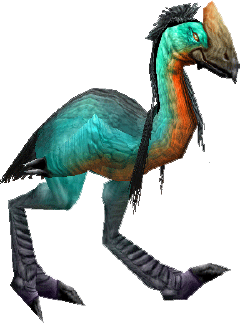 [Dust Cloud]
Tallstriders can now eat bread.
Damage had no bonus and now has a +10% bonus. 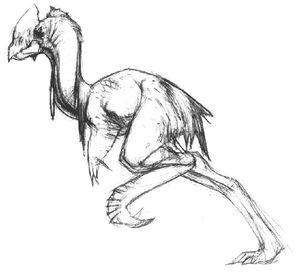 Tallstriders are large, flightless birds of prey that look to kill anything they can outrun or overpower. They have a pair of muscular legs, and their vestigial wings flutter as they walk. Their thick hairless necks swing about a head ending in a heavy, sharp beak as they hunts for prey. Renowned for their speed, tallstriders are difficult to shake for those trying to flee them. They resemble 6-foot tall ostriches with strong, thick necks and heavy, sharp beaks. Tallstriders are common in Mulgore, Darkshore, the Barrens, and Durotar. Young heroes in these regions hunt these beasts in tests of honor and valor. Tales tell of heroes who attempt to tame tallstriders as mounts or beasts of burden, but these tales are typically humorous ones. If it is possible to domesticate the flightless birds, no one has claimed success at the task.

Tallstriders are tenacious pack hunters. A tallstrider’s main mode of attack is with its beak and talons. It will smash its beak down upon a victim with ruthless efficiency. Tallstriders hunt instinctively in packs. Tallstriders attempt to isolate single members of a pack of prey and run them down. When facing stronger prey, they harry a single victim if possible until, after hours of running, the quarry is most likely exhausted and weak. Tallstriders will attack prey - which includes anything larger than a field mouse - on sight, always fighting to the death. They leap at their opponents while slashing with their claws and stabbing with their beak. If hungry, tallstriders will attack until they or their prey are dead.[9][10] 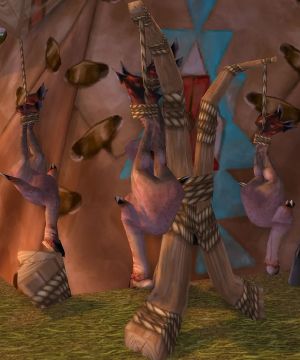