Taloc is a titan construct and the first boss of Uldir.

It is initially seen atop the Heart of Darkness in Nazmir, being corrupted by blood. The Gob Squad tried to destroy it with their A.M.O.D., but the operation couldn't be succeeded until Grand Ma'da Ateena was killed and the blood shield dispelled. Taloc then fell after the Heart of Darkness roof collapsed.

The titan keepers enacted countless systems to detect and contain any breach from the facility. Their most powerful construct, Taloc, kept watch for any signs of corruption in the region and ruthlessly excised any that he found. But as thousands of years passed, its internal defenses began to decay, making it vulnerable to corruption. 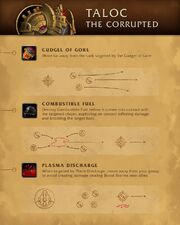 Overview of tactics for the Taloc fight.

Taloc's blood-fueled magic will flood the room with Blood Storms. His powerful Cudgel of Gore will absorb nearby Blood Storms. At 35% health, Taloc's fuel spills into the arena causing him to Power Down and spawn Coalesced Blood and Volatile Droplets. Volatile Droplets will continue to spawn once Taloc reabsorbs his fuel, canceling Powered Down and engaging the raid once more.