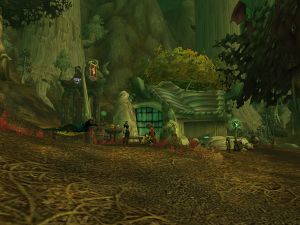 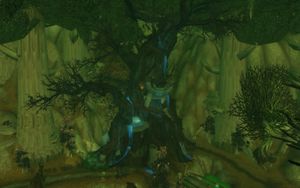 Talonbranch Glade is an Alliance outpost in the northern parts of Felwood. Gilnean worgen were sent to Talonbranch in order to help the night elves with defending it from the attacking goblins from the Bilgewater Cartel; the Glade then turning into a prominent Gilnean outpost. Talonbranch Glade is located south of Timbermaw Hold, which leads to Moonglade and Winterspring.

Prior to the Cataclysm, Talonbranch Glade was a small night elven post, comprised of a house moonwell and various other night elven scenery. As of the Cataclysm, The Glade stretches down into the ramp entrances, boasting Gilnean structures, Gilnean flags, and a large tree similar to Tal'doren in the Blackwald.

According to the leader Denmother Ulrica, several of the worgen (possibly including herself) present in Talonbranch had been around since Velinde Starsong first summoned the worgen with the Scythe of Elune.

Denmother Ulrica says that a few of her people have lived in this land since the Scythe of Elune first passed through it.

Denmother Ulrica also says most suffered through the fall of Gilneas.