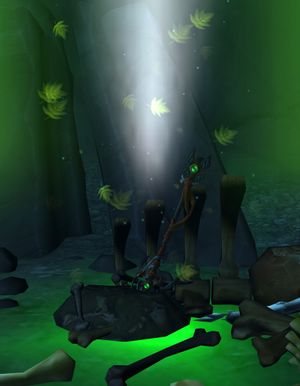 Talonclaw, also known as the Eagle Spear and the Spear of the Wild Gods, is the artifact used by survival hunters in World of Warcraft: Legion.

The spear allows its wielder to fly while he or she is dead.

The Highmountain tauren crafted this spear, which predates the first demonic invasion of Azeroth more than ten thousand years ago. Talonclaw's wielders have fought alongside many guardian animal spirits, also known as Ancients, to defend the world of Azeroth and its wildlife in particular. Over the millennia, these Ancients have bestowed their blessings on the weapon, imbuing it with a portion of their power.[1]

Ohn'ahra, an eagle Wild God, was once saved from fire elementals by Moren Highmountain, a tauren chieftain of the Highmountain Tribe. In thanks, Ohn'ahra infused a portion of her power into Moren's spear, gifting it with magical abilities. Moren carved Ohn'ahra's name into his spear in honor, and his people would take to calling it the Eagle Spear. To commemorate other heroes he encountered, enemies he bested, and events he witnessed, Moren carved their names onto the Eagle Spear. As the spear was passed down to his descendants, they too carried on this tradition. In this way, the spear has become a living history of the Highmountain tribe. Moren's granddaughter, Eruna Highmountain, received a blessing on the Eagle Spear from the bear Wild God Ursoc after fighting alongside him against the forces of the Old Gods. The Eagle Spear was used by Huln Highmountain during the War of the Ancients, and before Omen succumbed to demonic corruption he blessed it as well.[2] After Huln's life was saved by Jarod Shadowsong, he promised to carve Jarod's name on it in honor.[3]

It is apparent that with the blessings of no less than three Wild Gods, the Eagle Spear also became known as the Spear of the Wild Gods, although nowhere is it stated that this was ever used as an official name.[4]

At the final battle for the Well of Eternity at Zin-Azshari, Huln grievously wounded a doomlord named Xyburn by taking out the demon's left eye, forever earning himself, his species and the Eagle Spear Xyburn's enmity.[5]

Two of Huln's descendants, twin sisters Arien Highmountain, the Protector of the Mountain who had bestowed the name "Talonclaw" to the Eagle Spear, and Chieftain Gardrel Highmountain, led the Unseen Path to a mountain nearby Thunder Totem. On approaching the summit, Arien noticed Talonclaw begin to glow. Holding it up to the sky, all were amazed as a cascade of golden energy poured from the spearhead and took the shape of a great eagle. The twins realized that Ohn'ahra herself had just blessed the site, and the newly sacred area was renamed to "Talon Peak". After the Highmountain helped to build Trueshot Lodge and the Three Talon towers, Arien herself eventually joined the organization.[6]

Generations later in Stormheim, Chieftain Dorro Highmountain lost Talonclaw and his life in battle to a fierce nightsaber, a magically corrupted monstrosity called Dakarr that had been hunting the tauren. All attempts to retrieve it failed.[7] 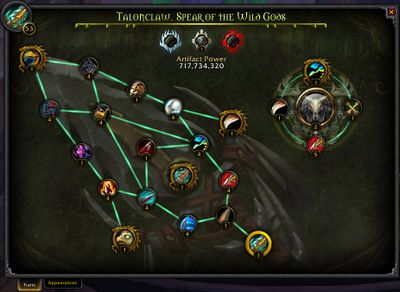 [Call to the Eagles]

Valorous: Spear of the Alpha