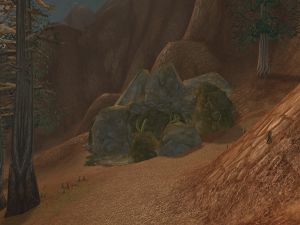 The Talondeep Path was a winding tunnel that connected Ashenvale with the Stonetalon Mountains. Although it was riddled with small dead ends and interesting holes in the walls, there were no friendly NPCs nor hostile mobs inside. The entrance on the Ashenvale side was found just west of Mystral Lake, while the entrance on the Stonetalon side was found in the northwestern part of Windshear Crag.

In the wake of the Cataclysm, goblins blasted this cavern open, making a larger (and mountable) pass through the mountain called the Talondeep Pass.

Windshear Pass is found along the southern border of Ashenvale and it is the entrance to Windshear Crag. The winding path leads from the wilds of the primordial forest into the stormy canyons of the Stonetalon Mountains, where harpies roost.[1]