For the lore of the zone and its status after the Cataclysm, see Tanaris.

Tanaris is a desert located in southeastern Kalimdor, east of Un'Goro Crater and south of Thousand Needles. It is an arid land, covered in sand dunes and frequently exposed to dangerous sandstorms. The Steamwheedle Cartel has its main base of operations here - Steamwheedle Port and Gadgetzan have been founded by the goblins of Undermine since this desert is as close to home as they can get on the continents. The dock in Steamwheedle is presumably used for transport to the outer islands, but so far, the goblins have proved unwilling to share the ships with the other races. 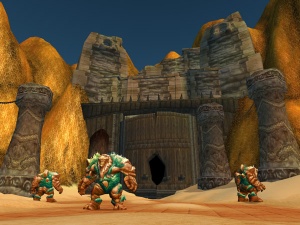 The Tanaris Desert has been an endless sea of sand for aeons. Nozdormu, the great dragon of time, was said to make this land his home since time immemorial, thriving in the solitude of oppressive heat and miles of sand.

Tanaris is the ancestral home of the bronze dragonflight based out of the Caverns of Time. The titans also have a holding here in form of the ancient city of Uldum, found in the southern parts of the desert. It was here that Anachronos first discovered the full threat of the silithid, who had been making hives in the remote regions of Tanaris. The War of the Shifting Sands was consequently unleashed upon the western land of Silithus.

Alliance
From Thalanaar, head east through Thousand Needles and south through the Shimmering Flats. Through the mountain pass to the south of the flats lies Gadgetzan.

Horde
From Freewind Post travel east into the Shimmering Flats, then head south through the mountain pass to Gadgetzan.

The Tanaris Desert covers a vast expanse of southern Kalimdor, just south of the Thousand Needles. It is a blazing hot expanse of rolling sand dunes under a cloudless sky. The southern region is more mountainous, with large cavern networks - some extending deep beneath the surface. A vast realm, the Tanaris Desert holds many secrets. The land is mostly desert, and below the ground are gigantic tunnel networks. They remain largely unexplored, for few have the fortitude to venture into such a harsh landscape. Still, rumors tell of all manner of creatures that hide within the tunnels and slaughter trespassers without hesitation. Although the sea of dunes does not look as if it would support a variety of wildlife, humans, Sandfury Trolls, hyenas, scorpids, basilisks, and silithid bugs are quite common. Occasionally drakes are also seen soaring on the thermals that swirl over the great desert.

It is home to a single instance; Zul'Farrak, as well as several micro dungeons. 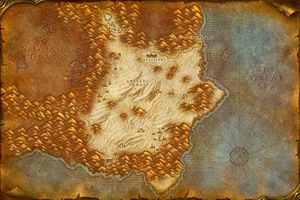 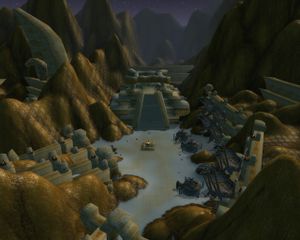 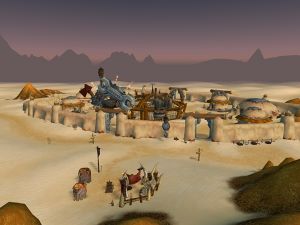 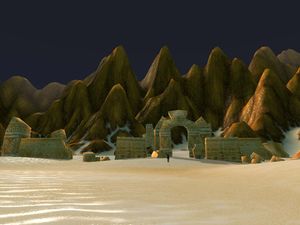 Tanaris is home to several characters of note. At Gadgetzan, Mux Manascrambler seeks aid in obtaining ghostly ectoplasm from undead spirits, and Senior Surveyor Fizzledowser investigates the coming of the silithid. And at Steamwheedle Port, Yeh'kinya attempts to learn more of the essence of an ancient god... 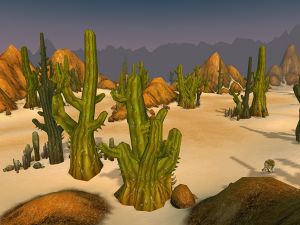 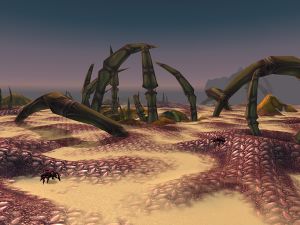