From Wowpedia
(Redirected from Tandred)
Jump to: navigation, search 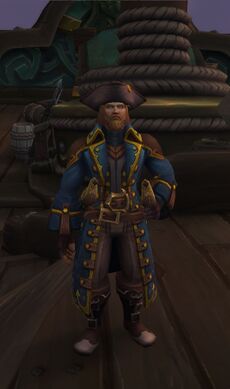 Tandred Proudmoore is a captain of the Kul Tiran fleet, son of the former Lord Admiral Daelin and Katherine Proudmoore, and the youngest brother of Derek and Jaina. He is described as a fearless explorer and sailor of uncharted waters.[1]

With the death of his brother Derek during the Second War, Tandred largely grew up as the "baby brother" of Jaina. As a child, it seems like he had a habit of teasing his older sister (which she possibly may not have always appreciated), but they nonetheless held a warm and loving sibling relationship.

When details of Daelin's death and Jaina's actions from the Invasion of Durotar reached Kul Tiras, most did not want to understand why it happened and were just angry it did, including their mother. Tandred, however, knew their father could be a hard man[2] and understood Jaina's reasons, and so did not blame her.[3]

Tandred was thought to have died at sea in a storm,[1] but the truth was that the Kul Tiran fleet which he commanded had been captured and hidden in a magical storm by the traitorous Tidesages who served Queen Azshara, several months before Jaina's official return to Kul Tiras.[4]

Jaina would use their father Daelin's pendant to break the storm and free the missing fleet. Discovering the Irontide Raiders fleet ahead of them en route to assault Boralus, they surrounded the pirates, forcing Priscilla Ashvane to surrender.[5] Tandred later attended the ceremony where Katherine named Jaina the new Lord Admiral of Kul Tiras.[6]

Some time later, Tandred was at Proudmoore Keep with his family near the memorials of Daelin and Derek, as well as his own which he told his mother he appreciated. Upon Jaina's arrival, Tandred addressed her as Lord Admiral, which Jaina told him not to do and that she had always assumed Derek would be Lord Admiral. By this time Tandred had also learned that Derek's corpse had been retrieved from the bottom of the ocean by the Horde and that they were taunting the Proudmoores with it. With Tandred, Jaina, and Katherine together again, Tandred couldn't help but wonder what Daelin and Derek would think of what the Proudmoores and Kul Tiras at large had endured. During the family reunion, the Horde attacked Anglepoint Wharf, and Jaina ordered Tandred to flank them with the fleet while she dealt with the Horde personally.[2] Tandred later captained Jaina's ship during the assault on Dazar'alor.

Admiral Tandred Proudmoore was left to hold Kul Tiras together while both, Jaina Proudmoore and Grand Admiral Daelin Proudmoore sailed west.[8] He took the position of ruler of the Kul Tiras following his father's demise in Theramore. Tandred is a good person but doesn't have his father's courage as he is not the man his father was. He gets a lot of help from his lady friend, Captain Mishan Waycrest. Tandred does the best he can with the few men and fewer allies he has left. He is classified as a fighter and aristocrat.[9]