For the mob, see Tarantula (mob). 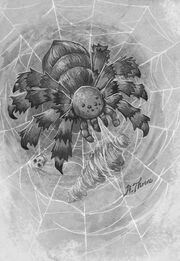 A spider webbing its prey.

Tarantulas are a group of large, hairy spiders, that can be found in many regions of Azeroth.

Although Redridge Mountains is a peaceful Alliance region, the mountains remain dangerous at times, with tarantulas in the east. When traveling though here, Brann Bronzebeard himself stumbled upon a nest of tarantulas. He noted that if you followed the current from the Stonewatch Falls, you would eventually run into the canyons where tarantulas can be found, so most people did not go that far.[1]