Not to be confused with World Marker.
"Lucky Charms" redirects here. For the item, see

Target Markers (formerly referred to as lucky charms[1] or raid target icons[2]) are icons that raid leaders/assistants and party members can place over players and mobs. 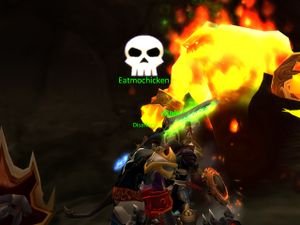 Oooh, look at me lucky charms!

To place a raid target icon over a mob, simply select the mob, right-click on its portrait, and select a symbol from the hierarchical menu. Using these symbols is valuable in parties and even more so in raids.

It is also possible to use keybinds and/or macros to quickly assign raid icons. This can be especially useful for changing targets on the fly, or placing emergency crowd control marks while in combat.

Carrying this further, a Raid Leader could even appoint each of those tanks / Crowd Controllers as Raid Assistant, and let them mark their own targets. Assuming your tanks are on the ball, this can save time where the Raid Leader does not need to be assigning targets, and ensures each person actually has that target targeted. Each tank / crowd controller should always use the same Icon (both within the raid, and even across multiple raids, e.g., "ElfMan always tanks the blue square") for this to work. This is for more advanced use, and some Raid Leaders do not like appointing Assistants.

Although there is nothing like a standard convention for icon meanings, the following table may provide a starting point for groups or guilds wishing to create a convention. Obviously, this would have to be altered on a per-case basis depending on group composition (for instance, parties with multiple mages/druids). Still, it can provide a useful foundation for groups or guilds getting used to the raid icon system. Note that icons carry different meanings when placed friendly versus hostile targets.

These icons can be set programmatically in a macro with the SetRaidTarget function. Example, /script SetRaidTarget("target", 8); will mark the target with a Skull, 8 standing for the Icon number.

Alternatively, they can be bound to keys for quick application. For example, Skull could be bound to Ctrl-K (Kill, sKull) so that the raid leader or assist can apply the icon quickly to a new target during a fight.

For even faster marking, combining the macro /script SetRaidTarget("mouseover", #); (# of course being replaced with the corresponding icon's number) with key bindings will allow you to apply icons without actually targetting anything.

GetRaidTargetIndex returns the icon index of the specified target.

This macro will cycle Skull, X, Nil, then Moon on cursored targets.

This macro will cycle through all the raid icons (including no raid icon) in reverse order on cursored targets. Replace "mouseover" with "target" if you want this to apply to selected targets.

This macro also cycles through all the raid icons in reverse order on cursored targets but it also announces the next icon in the default chat frame. Useful if you need to skip through charms while marking targets. Press your macro button without a target under the mouse to skip through charms.

The nickname originates from their appearance similar to the marshmallows from the Cereal Lucky Charms. The commercials feature kids chasing Lucky the Leprechaun, who would inevitably remind them that his cereal contained "Hearts, stars, horseshoes, clovers and blue moons, pots of gold and rainbows, and the red balloon!" These shapes were nearly impossible to identify without the jingle, as the tiny little marshmallow bits bear only the vaguest resemblance to the Lucky Charms they represented.

Previously only party leaders could mark.