For the character from the main universe, see Taria Wrynn.

Taria Wrynn (née Lothar) is Queen and Regent of the Kingdom of Stormwind, wife of the late King Llane Wrynn, and the mother of Prince Varian and Princess Adariall. She is the sister of Anduin Lothar.

After being instrumental in building trust between her people and the feral Garona Halforcen, Taria was crushed by the news of the death of her husband, made even more anguishing by Garona's betrayal, the murder carried out using the very gift Taria had given Garona for her own defense. Even as she struggles with her own grief, Taria knows that she must stand tall to lead her people, her family, and her kingdom in the fight against the Horde.

Taria in Bonds of Brotherhood. 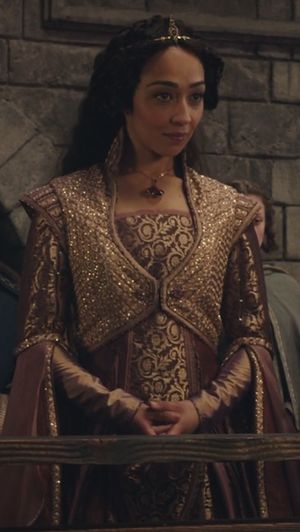 During the reign of King Wrynn, when Llane was still a prince, they kept their relationship a secret from everyone until the King asked Llane to find a noble woman as a wife. Llane immediately went to Taria to tell her the King's request. He was adamant about wanting her instead of a princess. Taria suggested waiting until the king would owe Llane a favor.

After Lothar's wife Cally died, she and Llane went to see Lothar and his newborn son Callan. He admitted to them that he knew about their relationship months ago. Following this, Llane gathered his father and Taria and announced him that Taria is going to be his wife.[2]

Please add any available information to this section.
Taria was present when Anduin Lothar, her brother and her husband's long time friend, entered the throne room.