Tarren Mill is a Forsaken town located in northern Hillsbrad Foothills, near the Alterac Mountains. Prior to the Third War, Tarren Mill was a simple Lordaeronian town.

It was destroyed by the Scourge and claimed by the Forsaken afterward, where it served as the staging point against the Alliance forces of Southshore and Dun Garok.[citation needed]  As time passed, Banshee Queen Sylvanas Windrunner had the town improved and reinforced. Tarren Mill now stands as a bastion of the Forsaken power, while its former rival Southshore lays in ruins. 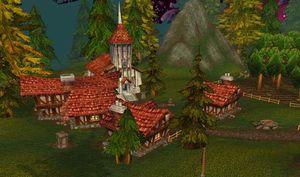 Tarren Mill once upon a time. 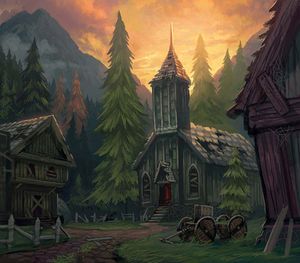 Tarren Mill in the TCG.

Tarren Mill was once a thriving human town. During the early days of the Second War, the high elves of Silvermoon sent a contingent of archers south to survey the supposed orcish threat in the area for themselves. Shortly after passing through the Alterac grasslands near Tarren Mill, the elves were ambushed by Horde troops.[1]

King Terenas ordered Alliance forces to the town in order to free the archers that had been captured and were then being held in a nearby prison camp. With the success of the mission and with the safe return of the elves from the orcs, the Council of Silvermoon then resolved to combine the armies of Quel'Thalas with those of the Alliance of Lordaeron.[2]

Two years after the ending of the Third War, Tarren Mill was still inhabited by humans and in a pristine state. It was attacked by the Scourge led by the traitor high elf Dar'Khan Drathir who were looking for the essence of the Sunwell. They were eventually defeated by Kalecgos, Tyrygosa, Anveena, Jorad Mace, Harkyn Grymstone and his bounty hunter's band, and later by the town's denizens.[3]

At some point the town was taken over by the Forsaken. Tarren Mill was depicted as a small town, with a church, a few houses and withered orchards. In the years between the Forsaken take over and the Cataclysm, Tarren Mill was as concerned with keeping its borders safe from the ogres, yetis and Syndicate thieves that roamed the surrounding areas as dealing with the Alliance. During this time, the town was, as many Forsaken settlements were, in a state of disrepair. 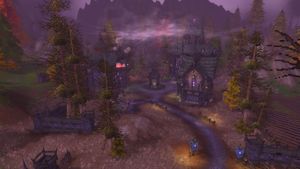 Tarren Mill was rebuilt using the new Forsaken architecture first used during the invasion of Northrend. The only traces of what the town used to be is the old barn on the outskirts of town. High Warlord Cromush led the Horde war effort to finish off the Alliance remnants remaining in Hillsbrad as well as defending against the Stormpike counterattack from the north. Following

[24] Stormpike Apocalypse, the forces of Tarren Mill were successful in destroying the last major Alliance force in Hillsbrad, delivering the region entirely to the Horde.

Under the command of Rotbringer Velthux and Flameweaver Verathix, the Burning Legion launched an attack on the Hillsbrad Foothills. Their main goal was to take the largest Forsaken town there, Tarren Mill. It was successfully repelled by Helcular, the town denizens, and some adventurers.

Following the Battle for Lordaeron, Cromush joined the Horde at The Banshee's Wail in Zandalar, and the Alliance went to establish dams at Darrowmere River and encountered Melisara at Tarren Mill.[5] Horde forces out of Tarren Mill were attempting to rebuild Durnholde Keep. Alliance champions were sent to reset their progress by laying explosives, encountering Magus Wordeen Voidglare.[6] Wildhammer gryphon riders patrolled Darrowmere River preventing Horde troop movement. Under the cover of darkness, Horde champions were sent to infiltrate their roost and slay their mounts at Tarren Mill.[7]

Tarren Mill is under attack! 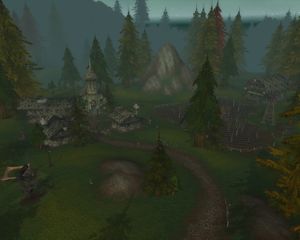 The shabby settlement of Tarren Mill before the Cataclysm.

Before the introduction of battlegrounds, Tarren Mill was often inaccessible because of the frequent all-out war that took place right outside it, and oftentimes even inside it; this situation was created because Southshore was so close by. In the early days, it was not uncommon for every single NPC — merchants, quest NPCs, and even the bat handler — to be killed immediately upon their spawning. The honor system did eventually manage to curb this slaughter, but it didn't even put a dent in the real problem: ganking of low-level players, a problem that existed mainly because Horde players arrive there at level 20-30, whilst many Alliance players go there 5 to 10 levels later.

The huge load of dozens of players fighting at once created massive zone-wide slowdown, oftentimes leading to a condition known as 'lag death' simply because a network connection couldn't possibly handle the overload — more than once an entire server has crashed whenever hundreds were fighting simultaneously. If one were to be either foolish or masochistic enough to turn on the LocalDefense channel (or, alternately, the WorldDefense channel), the phrase that gave Tarren Mill its nickname would literally crowd out anything and everything else in the chatbox. A very similar situation happened at Southshore; if the Alliance were not attacking Tarren Mill, the Horde would be attacking Southshore. Upon the introduction of the honor system all out wars would be held containing upwards of 100 players per side resulting in many servers actually crashing.

A common sight (if one's hardware could manage to show it) was a veritable wall of Alliance charging the town, with another wall of Horde rushing forward to meet them. Common latency times were 5+ seconds, with the highest values of 7+ seconds. Since the introduction of battlegrounds, however, what was once a fool's dream is now a reality: sporadic peace in Tarren Mill. However, on PvP servers it is still a favorite area for Alliance players to hunt lower-level Horde players.

With Warlords of Draenor the developers plan to recreate the "timeless struggle" between the two towns with a new 100v100 "team deathmatch-style" battleground, available only for a limited period. The battleground will recreate the zone as it was in vanilla World of Warcraft.

In The Burning Crusade expansion, adventurers are transported to the past to help preserve the timeline by aiding a young Thrall. Instead of heading straight to Durnholde, however, players may explore a portion of Hillsbrad, including both Tarren Mill and Southshore.

Tarren Mill is a major Horde stronghold, which includes a garrison of high-level Horde champions who repel raids from Alliance adventurers. It is the biggest Horde threat in the region, and Aretain Naris' ultimate goal is its destruction. For its part, Tarren Mill sends patrols to search for Aretain's men, but so far he has managed to elude them.[8]

Humans once ran this mill, but it fell to the Forsaken. The undead, led by High Executor Darthalia, attack the Hillsbrad's citizens mercilessly.[9] The Alliance is constantly sending troops from Southshore to retake it.[10]

If heroes approach Tarren Mill, its defenders will watch them, but won't openly attack. If they come within a half-mile, a raiding party will move to intercept them. The soldiers will warn them to go away, and attack if they fail to comply. They are not interested in parley.[8]