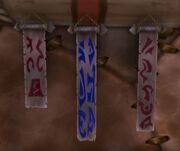 Taur-ahe (pronounced "taur-AH-heh"), often written without the hyphen,[1][2][3][4] is the language of the tauren. It is at least partially written using pictograms.[4] There are many different forms and dialects of Taur-ahe, all differing based on tribe and location.[5]

Here are a few common Taur-ahe phrases and words, for which the translations have been officially confirmed by Blizzard:

The language of the tauren is often harsh and low sounding, which is reflected in the names of their children. The last name of a tauren is usually a family name, handed down through the generations. If the tauren has performed some act that has made an impression on the elders of his tribe, however, he may choose to take on his own last name to commemorate that act.

This is the list of words created by the in-game language parser for the Taurahe language, and is listed as language number three (word range 315-422) in the Language text file. The parser is used to mask both NPC and players that speak "Taurahe" when encountered by other races.

When translating text, the language algorithm will use the exact same number of letters for each word and the same order they were said in. Multiple things will turn out to be one word.

It should be noted, however, that some language algorithm translations, like "Echeyakee" and "Isha Awak", have been made official.

Peace and patience be with you, <name>. Remain strong as always.

The Earth Mother watch over us under cover of the night as in the day. Let this fire illuminate both our bodies and spirits and remind us of our honored ancestors, who are ever present and guiding our way.