This article is about the playable race. For the tauren lore, see Tauren. For the in-game faction, see Thunder Bluff (faction).

The tauren [ˈtɔɹən] (shu'halo in their native tongue)[1] of Thunder Bluff are one of the playable Horde races in World of Warcraft. Originally consisting of numerous scattered tribes, the tauren people came together under the banner of the Bloodhoof tribe and, after receiving their aid against the marauding centaur, found fast friends in the newly arrived orcs.

Tauren begin their journeys in the Red Cloud Mesa, an area of rolling plains atop the high cliffs in southern Mulgore. Their adventures through the zone will eventually lead them to Thunder Bluff, which is also their capital city. The mount of choice for tauren is the kodo. They speak Taur-ahe as a main language, and Orcish as a second.

For the Horde, tauren were the only race capable of being druids until trolls gained access to the class in Cataclysm. 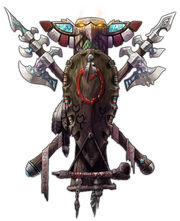 Icon of the Earth Mother

Always the tauren strive to preserve the balance of nature and heed the will of their goddess, the Earth Mother. Recently attacked by murderous centaur, the tauren would have been wiped out, save for a chance encounter with the orcs, who helped defeat the interlopers. To honor this blood-debt, the tauren joined the Horde, solidifying the two races' friendship.[2]

Always the tauren strive to preserve the balance of nature and heed the will of their goddess, the Earth Mother. Many of the nomadic wandering tribes of tauren have gathered together under a single banner to settle in the fertile plains of Mulgore. Were it not for the timely intervention of the orcs, the whole race may have been wiped out by marauding centaur. The tauren honor their blood-debt to this day, fighting alongside the Horde to protect their land.

The spiritual and peaceful Tauren cultivate a kinship with the natural world around them in the name of their goddess, the Earth Mother. They live honorable lives and value peace over the warmongering ways of their allies.[3]

Once a nomadic people, the tauren roamed the endless plains of the Barrens, hunting the mighty kodo. Scattered across the land, the wandering tribes were united only by their common hatred for their sworn enemy, the marauding centaur. Seeking aid against the centaur, the great chieftain, Cairne Bloodhoof, befriended the savage orcs, who had recently journeyed to Kalimdor. With the orcs’ help, Cairne and his tribe were able to drive back the centaur and claim the grasslands of Mulgore for their own. Upon the windswept mesa of Thunder Bluff, Cairne built a refuge for his people. Over time, the scattered tribes united under a single banner. Though the noble tauren are peaceful in nature, the rites of the Great Hunt are venerated as the heart of their spiritual culture. As a tribesman of Mulgore, you must test your skills in the wild and prove yourself in the Great Hunt.

Great tragedy has rocked the tauren tribes and shaken their once-stalwart devotion to the Horde. A disagreement between the new orc Warchief, Garrosh Hellscream, and the beloved tauren chieftain, Cairne Bloodhoof, led to a duel that ended in Cairne's death. With his loss, the vile matriarch Magatha Grimtotem launched a murderous attack, attempting to seize control of Thunder Bluff for herself. However, Cairne's brave son, Baine Bloodhoof, successfully repelled the attack and banished the surviving Grimtotem to the farthest reaches of the land. Under Baine's hopeful leadership, the tauren people seek to heal their wounds and restore the balance between the various factions of the Horde. To this end, a new generation of tauren "Sunwalkers" has arisen to lead their people into the Light of a new dawn and the promise of rebirth. As a proud tribesman of Mulgore, you must uphold the honor of your people and safeguard the lands of your ancestors.

For countless generations, the bestial tauren roamed the plains of the Barrens, hunted the mighty kodos, and sought the wisdom of their eternal goddess, the Earth Mother. Scattered across the land, the wandering tribes were united only by a common hatred for their sworn enemy, the marauding centaur. Seeking aid against the centaur, the chieftain, Cairne Bloodhoof, befriended Warchief Thrall and the other orcs, who had recently journeyed to Kalimdor.

With the orcs’ help, Cairne and his Bloodhoof tribe were able to drive back the centaur and claim the grasslands of Mulgore for their own. For the first time in hundreds of years, the tauren had a land to call their own. Upon the windswept mesa of Thunder Bluff, Cairne built a refuge for his people, where tauren of every tribe is welcome. Over time, the scattered tauren tribes united under Cairne’s rule. There are a few tribes who disagree about the direction their new nation should take, but all agree that Cairne is the wisest and best suited to lead them towards the future.

Though the noble tauren are peaceful in nature, the rites of the Great Hunt are venerated as the heart of their spiritual culture. Every tauren, warrior or otherwise, seeks identity both as a hunter and as a child of the Earth Mother. Having reached the age of maturity, you must test your skills in the wild and prove yourself in the Great Hunt.[4]

The tauren are some of the most physically imposing creatures to ever walk the earth.

The tauren character model is large. In the beginning, tauren player characters will not notice this; everything is tauren-sized and is scaled to the tauren point of view. Later, when the character interacts with other races, the difference becomes apparent. Occasionally, tight quarters will hamper the tauren player character's movement, especially when mounted and/or having any size-increasing buffs. Any tauren experiencing such problems can use items that decrease one's size or alter their appearance in certain ways (such as

[Savory Deviate Delight]) as a workaround.

Tauren can play as any class except mages, warlocks and rogues.

The hypothetical tauren rogue is a common joke among Horde players. For the tauren, the rogue profession is an alien concept and therefore rare (if not non-existent) among its peoples.[5] The same holds true for the arcane-wielding mage. The renegade Grimtotem tribe however possesses the rogue and sorcerer class.