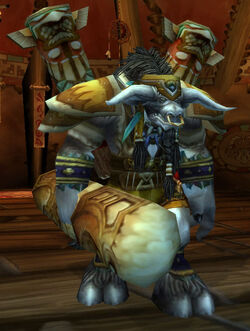 Cairne Bloodhoof with a totem weapon and a totem harness on his back. 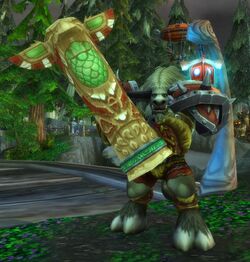 A Thunderous Brave with a totem weapon in the War of the Thorns.

Tauren totems are both a weapon and a building used by the tauren.

They are also called totem poles and represent a link to the tauren's past. The carvings provide a focus for shamanic arts or illustrate stories of famous events or heroic tales.[1]

When roused, tauren are fierce fighters and use their mighty totems to smash their enemies into the dust of the plains.[2]

"Tauren" units use totems as weapons in battle.

After Cairne's death, his son Baine took up his enormous totem as his own.[3] As all of Cairne's weapons were blessed by a shaman, this would allow the totem to strike and harm incorporeal spirits as if they were any solid opponent.[4]

If this massive weapon looks like it's an intricately carved tree trunk, that’s because it is. The tauren prefer to spend their time decorating and meditating on their totems, but they are also perfectly willing to hit foes over the head with them. Said foes quickly learn the error of disturbing a meditating tauren.[5]

Spiritwalkers can use tauren halberds and tauren totems.[6]

The Blackgore Totem is a famous totem.

The regular tauren heritage armor will also have a totem in the cloak slot.

Building in the Third War

The tauren totem is a building for the Orcish Horde in Warcraft III, where the tauren are trained.[7]

The proud, noble tauren, having allied with the orcish horde, reside here and hone their abilities through contact with their spirit totems. This structure allows the mighty tauren to make use of the Pulverize ability, a technique that damages enemy forces and adds a unique tool to the tauren's already wide-ranging arsenal.[8]

In World of Warcraft, tauren totems are often found in tauren lands, but not generally as a structure with a use, just as decorations. The flight path in Thunder Bluff is inside a giant totem.