Taylor was one of the premier commanders of the Alliance military, having served over 15 years.[3] Few are as decorated or experienced on the battlefield. Even in death, he fights to protect the innocent from harm.[4] Taylor played a great part during the Cataclysm and Pandaria campaigns. He was first seen as Captain Taylor when the Alliance began their push toward Vashj'ir. After being captured and freed from the naga, he joined an adventurer in several missions against them, mirroring Nazgrim for the Horde.

After the events of Vashj'ir, Taylor was promoted to Admiral Taylor and found himself shipwrecked on the continent of Pandaria along with young Prince Anduin Wrynn. Taylor and his crew and an adventurer searched for the lost prince throughout the Jade Forest and recruited the Pearlfin Jinyu to the Alliance.

Following the Invasion of Pandaria, Admiral Taylor was sent as a commander of the Alliance forces during the war in Draenor. There, Taylor established a garrison in the Spires of Arak. He agreed to protect Wrathion from the local ogres provided he stayed under house arrest and full-time guard because of his actions during the trial of Garrosh Hellscream. His garrison was infiltrated by necromancer traitors who killed most of his troops and assassinated him. Taylor's undead spirit still fought alongside the Alliance commander as a follower during the Spires of Arak storyline.

Following the Cataclysm, the land began to rise up in the area off the coast of Stormwind, known as Vashj'ir. King Varian Wrynn ordered the Alliance navy to immediately claim the land. Taylor was the captain of a contingent of Stormwind Elite Aquatic and Land Forces[5] sent to reinforce the hotspot battleground. Along with his crew and an adventurer Taylor sailed out from Stormwind aboard The Briny Cutter, a position that awarded him a cutlass. Unfortunately, they were soon attacked by Ozumat and the ship sunk.[6] Taylor, his crew, and the adventurers were rescued by the efforts of the Earthen Ring shaman Erunak Stonespeaker.[7] While Stonespeaker requested for reinforcements from the the Earthen Ring, Taylor and his rescued men were charged with defending the survivors until help arrived. However, his men were in no condition to fight[8] and the Alliance adventurer was tasked with holding off the hostile naga[9] and also acquiring food[10] and armament supplies so that Taylor's unit was combat ready.[11][5] Taylor's unit fought off a Zin'jatar naga assault[12] but their unit was overwhelmed and subsequently captured.[13] Taylor was enslaved and forced to pearl mine in Nespirah, the giant clam-like ancient under the thrall of the naga. However, Taylor joined forces with other Alliance slaves, and have fought their way to freedom. When the Alliance adventurer rendezvous with them, they resume their war against the naga.[14] Taylor tasked the adventurer to aid in freeing Nespirah from the naga's influence[15] and succeeds in getting the ancient to revolt against their naga enemies.[16]

Taylor participated in Admiral Dvorek's assault on the Ruins of Vashj'ir.[17] Although the Alliance managed to significantly thin the naga's ranks,[18] Dvorek's army suffered heavy casualties;[19] including Admiral Dvorek himself.[20] Taylor and the survivors retreated to Tranquil Wash, where Taylor had the survivors hunker down until Jorlan Trueblade, Engineer Hexascrub, and the adventurer get help to rescue them.[21] Eventually they succeed in making contact and Taylor dispatched the survivors to the surface and onto the safety of Alliance ships.[22]

Captain Taylor went on to prepare for his next operation at Voldrin's Hold. There, he went on to hunt Ozumat on the Pincer X2. Although the gnomish submarine engaged Ozumat, Ozumat escaped. The Alliance reconnaissance team in the meanwhile, established a base in Darkbreak Cove.[23] After the adventurer reported the intelligence the reconnaissance team gathered about the hostile wildlife to Taylor at Promontory Point,[24] Taylor went on to aid his Earthen Ring allies in purging some of the corrupted Fireplume Trench wildlife[25] and freeing creatures such as Wil'hai from Tentacle Horrors.[26][27] Taylor went on to help the Earthen Ring in liberating a dying L'ghorek from the Twilight's Hammer's influence. Taylor tasked the adventurer to slay the Nether Fiends protecting the Twilight Hammer ogre magi within the Undershell.[28] In L'ghorek's final moments, it revealed the Old Gods' intention to wage war on Neptulon.[29]

The naga inevitably revealed themselves to be allied with N'Zoth's faceless ones, showing they were a part of the Old Gods' forces and have begun their invasion of Neptulon's domain. Eventually receiving backup in the form of the crew of the submarine Pincer X2, Taylor and the adventurer took part in the defense of the Abyssal Maw from the naga and faceless ones.[30] As Erunak was captured by Ozumat, Taylor and the adventurer followed it down into the Throne of the Tides, where the duo freed Erunak,[31] slew Lady Naz'jar,[32] and defeated the naga and faceless one interlopers.

Taylor later returned to Stormwind where he was promoted for his brave actions and was awarded with a ceremonial sword. 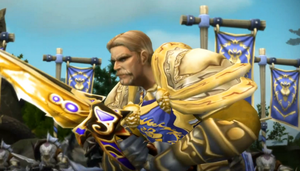 Taylor has been promoted to Admiral, and was given command of Stormwind's royal flagship, The Vanguard, which would later run aground at the Jade Forest in Pandaria. Taylor was found by the Alliance adventurer as an unconscious prisoner of the Forest Hozen.[33] With the help of fellow prisoner Bold Karasshi, the adventurer aided in rescuing their imprisoned comrades and found sanctuary in Pearlfin Village.[34] When Admiral Taylor recovered, he met with Sky Admiral Rogers who informed him that the Skyfire was unable to provide support and advised him to make do with the SI:7 agents and the friendly locals to secure the Alliance's foothold. As the SI:7 agents continued the search for Prince Anduin,[35] they discovered that the Horde forces had allied themselves with the Forest Hozen.[36] To counter this new development, Admiral Taylor allied himself with the Pearlfin Jinyu. Taylor trained the Pearlfin in their superior military knowledge and equipped them with Alliance weaponry.[37] After training a contingent of jinyu troops, Admiral Taylor tasked the adventurer to lead them in skirmishes against the hostile Forest Hozen.[38] The war with the Horde eventually culminated in a battle at Serpent's Heart, where Taylor led the Alliance forces. The violence and hatred from the battle however, broke the seal that the statue protected and released the sha.[39] The sha killed many combatants on both sides[40] and the adventurer rescued Taylor and other Alliance soldiers from the sha's fallout.[41]

Commander Hsieh informed the adventurer of Taylor's awakening in Binan Village and they entered the room shared by Taylor and General Nazgrim (who was also heavily wounded in the battle) at Binan Village, witnessing the two nearly come to blows.[42] Commander Hsieh decided to loan the Admiral her hunting bow. With the adventurer's help, Taylor later made an appearance in Kun-Lai Summit where he and the adventurer worked to recruit the pandaren of Westwind Rest by aiding them against the hostile yaungol.[43]

He later makes appearance in Lion's Landing, where he served as a major Alliance quest giver and aids in its defense during the Lion's Landing (scenario). He tasked Alliance adventurers to bring Agent Connelly out of retirement[44] and aid him in his endeavors to spy on the Horde.[45] Furthermore, Taylor directed Alliance adventurers to aid prominent Alliance heroes such as Prince Anduin Wrynn[46][47][48] Sarannha Skyglaive,[49] Lady Jaina Proudmoore,[50] and the Explorer's League[51] in their endeavors to support the Alliance war effort and prevent the Horde from utilizing the

[Divine Bell]. After Anduin was attacked by Garrosh for destroying the Bell, Taylor was seen in the Lion's Landing keep with the hurt Anduin.

Taylor is present on the Timeless Isle overseeing the Celestial Court with Lyalia, in Celestial Tournament along with his comrades. He also participated in the Siege of Orgrimmar helping the Alliance kill Kor'kron soldiers in the Underhold.

For his time in Pandaria, Taylor was awarded a glaive as a gift from the Temple of the White Tiger, Brewmaster Boof gave him a Keg Tapper wishing to drink with him again, and the pandaren from Paw'don Village gave him a boot knife for saving them from the Horde. 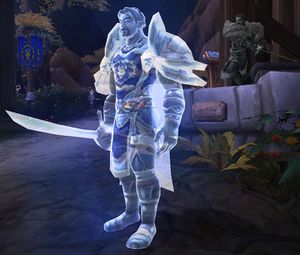 The spirit of Admiral Taylor.

Taylor arrived in Draenor and established his garrison in Spires of Arak. However, his subordinate Ephial betrayed him and turned the entire population into undead, including the admiral. Taylor's spirit was imprisoned and tortured, then turned by Ephial into the bone wraith Soulscythe.

Soulscythe and Ephial are defeated by the commander of Lunarfall or Horde adventurers. Taylor's spirit is then released from the necromancer's control, and after that joins the Alliance adventurer as a garrison follower.

He is involved in the following quests in Kelp'thar Forest:

The following quests in the Shimmering Expanse:

The following quests in the Abyssal Depths:

And the following quests in Throne of the Tides:

He is involved in the following quests in Jade Forest:

And in Kun-Lai Summit:

And in Lion's Landing: 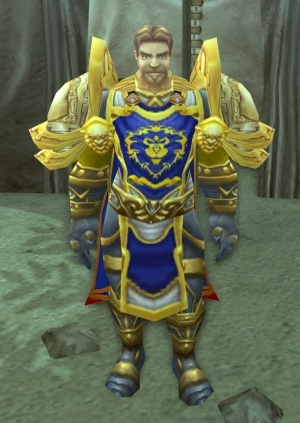 The subject of this section did not make it out of the beta stages of Mists of Pandaria.

The subject of this section did not make it out of the PTR stages of patch 5.1.

He is involved in the following quests in Spires of Arak: 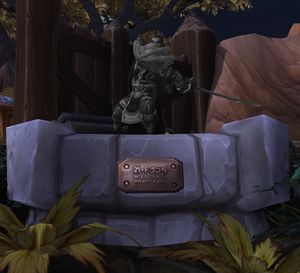 The inscription on Taylor's memorial.

A memorial dedicated for him is erected at Southport:

In honor of Admiral Taylor

Admiral Taylor was a true hero of the Alliance. His numerous accomplishments on the battlefield serving his people will not be forgotten.

He bravely set out to establish a garrison stronghold among these spires to further the Draenor campaign, but was cut down by his own men before his time.

May he rest in peace.

This was a good man, <race>. We'd served together through many battles...

These beasts have a debt to pay!