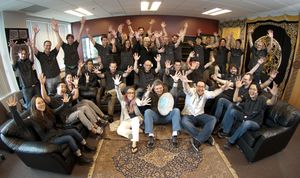 Team 5 is one of Blizzard Entertainment's development teams, responsible for Hearthstone.

Team 5 was formed in 2008 as a mix of company veterans and new employees, with the goal of creating a new type of game the developer hadn't created before. The emergence of new gaming platforms (e.g. the iPad) was another reason for the group's formation, to see if Blizzard could take advantage of the new platforms. Hearthstone was the result.[1] As of November 2018, it consists of between 100–300 individuals.[2] In February 2019, after a round of layoffs at Activision Blizzard, it was announced that the team would be expanded.[3]