For the item, see 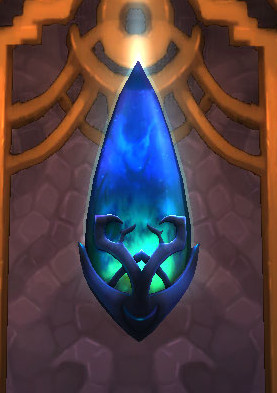 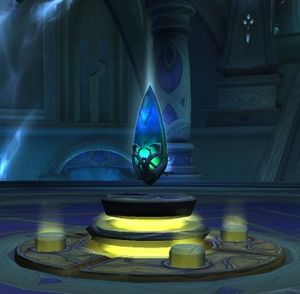 Tears of Elune in the Tomb of Sargeras.

During Azeroth's ordering, the Pantheon bestowed the Pillars of Creation to the titanic keepers to aid them with that colossal task. Ages after the keepers had completed their work, the Pillars would become lost and scattered across the lands of Azeroth.[2]

After the Highborne found the Pillars while hunting artifacts throughout Ancient Kalimdor, they guarded them in the Vault of Antiquities in Suramar. During the War of the Ancients, Grand Magistrix Elisande and her allies in Suramar, opposing Queen Azshara, used the Pillars to stop the Burning Legion from creating another portal in the Temple of Elune.[3] After their success, the Tears were moved for an unknown reason to the Temple of Elune in Val'sharah.

Ten millennia later during the third invasion of the Burning Legion, the Tears kept safe in the Temple of Elune in Val'sharah were stolen by Xavius who used the now Nightmare-tainted relic to corrupt the Aspect Ysera.[4] After defending the Temple of Elune from Ysera, the Tears were purified through what was apparently Elune's direct intervention.[5] They were taken by an order leader to Dalaran along with the other Pillars of Creation.[6]

The Tears of Elune were brought to the Tomb of Sargeras, alongside the other Pillars, in order to close the Burning Legion portal.