Gnomeregan Mechano-Mages were deployed during the Legion Invasions.

Other people may be techno mages as well: 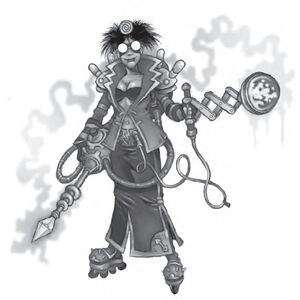 Techno mages are tinkering mages that combine the benefits from both magic and technology to create wondrous magical devices.

For years, arcane magic users and tinkers looked on each other with disdain. Each group believed that its way of manipulating the world was superior. Mages have history on their side, with 10,000 or more years of practice, and clear proof of their power (both good and evil). Tinkers have the arrogance of the new kid on the block, showing how they can give the common man the power to fly through the skies or go under the sea, while previously only stuck-up mages were able to do those things.

The techno mages rose as an answer to this problem. Instead of treating their inventions as mere items, they tended to view the objects as extensions of themselves, using their will to enhance the item temporarily. As they commonly do this in battle, some consider them valuable warriors. Others consider them insane. Views of the techno mages are mixed, as tinkers and mages see the class as a perversion of the purity of their own respective paths. Yet no one can deny the power these people wield.

Techno mages are wild-eyed folk, always looking for a shortcut to get what they want. Techno mages are solitary by design (though some gather together at the House of the Arcane Contraption), as there are few of them and many are put off by their odd pursuit of both technology and magic. They are, however, mind-hungry and have a keen interest to talk to mages or tinkers to see if they can learn new things. And if the tinker or mage is then interested in following the path of the techno mage, even better! They are used to derision, but often too caught up in their latest invention to really care. The life of the techno mage is not for the weak. Most techno mages come from a background of the mage path, although some warlocks have joined the ranks.

The techno mage has little patience when it comes to battle. They will go in, hit the enemy with all they have, and have it done with. The techno mage knows how to connect with their technological weapons, channeling their magic through them. Their gun does not shoot bullets, but fireballs or dire rats. The techno mage can, by touch, place any spell they have prepared into a technological weapon. The weapon’s next attack does not consume ammunition or fuel (if applicable). Instead, the weapon attacks with the spell. Note that characters firing (or otherwise employing) a weapon so enhanced do not need to target creatures; one could fire a long rifle containing a frost nova at a spot on the ground, for instance. Wherever the weapon strikes, the spell occurs. If the attack misses, depending on the spell involved, the attack might be wasted or the spell effect might scatter, as a splash weapon. If the techno mage uses this ability on a melee weapon, the weapon can deliver the spell with a physical attack. Note that this ability is not necessarily aggressive. It can cure serious wounds and teleport just as easily as starfall.

If a techno mage has made it this far, they has likely endured many mishaps, both technological and magical. The result of these trials is that they are more likely to be able to withstand damage from some form of energy.

As the techno mage becomes more and more in tune with their inventions, they can feel them as if they were sentient beings. They can almost communicate with them, telling ammunition and even grenades where to go. When a device breaks, usually from a malfunction, most consider it lost forever, or, at least until a skilled tinker has a good, long, expensive look at it. The techno mage can touch a device and coax it into one last use, putting some of their energy into it to keep it together. A skilled techno mage can truly feel the machines they touch. They can put their consciousness into a machine, vehicle or suit of steam armor and command it to move as if they were inside it. They control the device completely. They are often able to force a device to do things of which it is otherwise incapable, since their mind controls it directly. While controlling a device in this manner, the techno mage’s body is in a trance-like state, and they are unaware of their surroundings.[1]