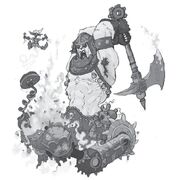 Some nay-sayers do not appreciate the slow spread of technology. They see this new science as inherently destructive, and believe that left unchecked, technology will eventually lay waste to Azeroth. The actions of certain groups, such as the Venture Company, are clear evidence of this. While some use magic or other means to halt the use of destructive technology, a chosen few use its own power against it. These techslayers study and learn what they can about technology, then use that knowledge to keep it in check.

Techslayers are often misunderstood. They do not hate science, only science used for evil purposes. Techslayers are adept at the use of technology, but they use their abilities to build, nurture, and protect - and, of course, stamp out destructive tech wherever they find it.[1]

The techslayer knows how to strike at constructs for maximum efficiency, to get around the defenses provided by armor, and to penetrate a construct’s inherent defenses. A skilled techslayer understands technological devices so well that he can shut them down with a single well-placed blow, the device cannot be reactivated until this damage is repaired. A higly skilled techslayer has achieved the pinnacle of his abilities, and is adept at destroying technological devices and constructs of all sorts.[2]

All techslayers have first-hand experience with the destructive power of science. Perhaps they've seen a forest torn asunder by mechanical cutters, or been the victim of an avalanche caused by explosive mining techniques. Regardless of the reason, this event created a lasting impression - technology, like fire, must be properly harnessed lest it get out of control.

Techslayers often come from backgrounds that take them close to nature. Druids and shaman, for example, sometimes take up the techslayer's path. The Horde employs far more techslayers than the Alliance, primarily because technology has achieved a lower level of acceptance within the Horde's ranks.

One of the techslayer's primary motivations is to eliminate the chaos created by rampant, uncontrolled science.[3]