Telogrus Rift, or simply Telogrus,[2] is the fragmented remains of a destroyed, Void-infested world, having recently become the base of operations for the Void elf race. It was here that the original void elves underwent their transformation from sin'dorei to ren'dorei, and it is here that they would eventually pledge their loyalty to Alleria Windrunner and the Alliance.

Dar'Khan Drathir discovered Telogrus Rift, and according to his notes Magister Umbric led his blood elves to it. Drathir's notes say that an ancient world existed within a rift in the very fabric of reality of which Telogrus Rift is that world's fragments.[3]

Telogrus was destroyed long ago by a being full of hatred, slaying great Void creatures in the process.[4] Only fragments of the world remained, still seeped in void energies and suspended in space.

The first Azerothian to discover the existence of Telogrus Rift was the high elf necromancer Dar'Khan Drathir through his studies of the void, believing the rift held an ancient object of unspeakable might.[5] Despite his extensive research, however, Drathir was never able to access the shattered world. It was not until the end of the Argus Campaign that a group of blood elf exiles from Silvermoon City led by Magister Umbric once again investigated the possibility of reaching Telogrus.

Umbric and his followers, having been banished from Quel'Thalas for their experiments with the void, built upon the work done by Dar'Khan Drathir and succeeded in reaching Telogrus Rift, entering the world in search of the powerful item that eluded Drathir in the hope of using it to finally harness the powers of the void. There, joined by the legendary Alleria Windrunner and her ally, the elves began trying to open an unspeakably ancient and mysterious cube they discovered in the area. Doing so, however, opened the way for Nether-Prince Durzaan, who overwhelmed those gathered and began a ritual to transform many of them into servants of the void.[6]

Led by Alleria Windrunner, a group of the mortals managed to defeat Durzaan and his forces, including the void monstrosity Nhr'ghesh, and free Umbric and the other elves. Though Durzaan's ritual was not completed, the process had permanently changed Umbric's blood elves, turning them into the some of the first void elves. In the aftermath of these events, the new void elves decided to make Telogrus Rift their new base of operations, as they pledged their loyalty to the Alliance. Alleria also remained on Telogrus to continue to instruct her new kin in utilizing and controlling their new powers.

Many void elves, as well as individuals from Azeroth,[7] conduct research and studies in Telogrus Rift, with a focus on better understanding and harnessing the powers of the void.[8] 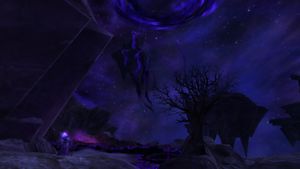 Little to nothing is known of Telogrus or its geography prior to its destruction.

Currently, the Telogrus Rift consists of six major islands suspended in space, with numerous other fragments floating in the immediate area. The landscape is rocky, and is almost devoid of life apart from the void elves themselves, though a breed of warp stalker known as the voidstalker does appear to inhabit the area; the void elves have since succeeded in taming these animals, turning them into pets. The land itself is largely soaked in void energies that can often be seen emanating from the surface of the planet. 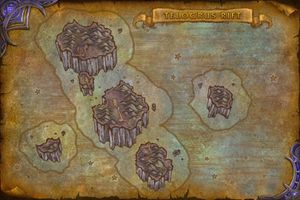 Based on what is known of its history, as well as references made relating to its past,[4] particularly Locus-Walker describing the world as 'broken by rage', Telogrus is highly likely to have been the Void-corrupted world destroyed by Sargeras to prevent the Old Gods present from completing the transformation of the world-soul into a dark titan.[9]