This article is about the dungeon hub. For the raid, see Eye (Tempest Keep).

Tempest Keep is a former naaru fortress in the Netherstorm in Outland. This crystalline fortress is now ruled by Kael'thas Sunstrider, the lord of the blood elves, and dominated by scores of his brethren. The structure is divided into three wings - satellites of the gigantic structure - with the fourth wing, the Exodar, now in the world of Azeroth as the draenei capital. The three remaining wings are differentiated by the different color themes: Botanica (Light blue), Arcatraz (Red) and Mechanar (Light purple).

The mighty Tempest Keep was created by the enigmatic Naaru, sapient beings of pure energy and the sworn enemies of the Burning Legion. As a base of operations for the Naaru, the structure itself possesses the technology to teleport through alternate dimensions, traveling from one location to another in the blink of an eye.[1]

Right before the invasion of Outland began, Khadgar and Velen reached out to the naaru independently, both seeking aid against the dark forces amassing on Outland. The Army of the Light heard their pleas but the Army's battles with the Legion were costly and ceaseless, so they could not spare soldiers to protect Outland. Instead A'dal, M'uru, and O'ros volunteered to help the people of Outland and arrived with Tempest Keep.[2]

With Outland serving as the strategic battlefront in the ongoing Burning Crusade, the Naaru used Tempest Keep to reach the shattered land. However, when the Naaru set out from their stronghold, Prince Kael'thas and his blood elves quickly raided the dimensional fortress and assumed control over its satellite structures. Guided by some unknown purpose, Kael'thas manipulates the keep’s otherworldly technologies, using them to harness the chaotic energies of the Netherstorm itself. Pieces of Tempest Keep were harvested and reused to create the manaforges.[3]

Though Kael'thas and his minions maintain a tight hold on the keep, a band of draenei hijacked one of its satellite structures, the Exodar, and used it to escape Outland. In seeking out other worlds, the draenei, led by the ancient prophet, Velen, hoped to find allies who would stand with them against the Legion and its nihilistic Crusade. The Exodar was damaged in the escape, and eventually crash-landed on Azeroth.

Tempest Keep can be accurately described as an enchanted fortress. It has the ability to Travel along the Twisting Nether - a realm of intense energy that links all the worlds of the Great Dark together. This is where the term "inter-dimensional" comes from. A "space ship" would simply traverse the distance of the great dark from point A to point B. Tempest keep uses the Twisting nether to travel almost instantaneously from place to place. In essence, it is a self-contained Dark Portal which operates on the same principle. 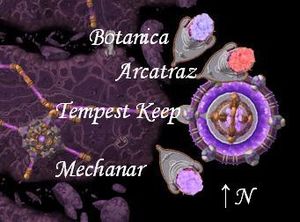 Evolution of the concept

Tempest Keep was originally stated to be the "Dimensional Ship" which the Naaru provided for the draenei's flight from Argus.[4] When the orcs were corrupted by Kil'jaeden, it was believed that many draenei hid away in the Keep for many decades.

Metzen: The draenei nether-ship you've been hearing about is far more than it seems. It's part of a larger dimension-traveling fortress called Tempest Keep that essentially teleports through alternate realities. It doesn't bank and roll or shoot photon torpedoes (not yet, anyway)..[5]

In a direct contradiction to the previous information about Tempest Keep, it was revealed in Rise of the Horde that Oshu'gun, the gigantic crystal in Nagrand revered by the orcs as their "Mountain of Spirits," was in fact the vessel that provided Velen and the draenei their escape from Argus, not Tempest Keep. It was also revealed in the Blizzard short "Unbroken" that Velen and the survivors did not flock to Tempest Keep to hide, but rather hid somewhere in the Zangarmarsh (possibly the hidden Telredor, or the Orebor Harborage on the border with the Blade's Edge Mountains). The story regarding Tempest Keep was changed accordingly; in The Burning Crusade manual, Tempest Keep was described as a naaru dimensional fortress that did not arrive on Draenor until after its destruction/transformation into Outland. The portion referring to Velen and the draenei raid on the Exodar in order to escape Outland was only slightly modified to fit the changed situation.