For the elemental templars, see Abyssal Templar and Glacial Templar.

Templar are a type of paladin and priest combatants. They are not only the most skilled in battle, but also the most righteous in their demeanor. Strength of arms and purity of mind are strict requirements. In the Silver Hand, they act as officers.

They are also present in the ranks of the Argent Dawn and fought in the first battle for the Light's Hope Chapel.[1]

During the Burning Legion's third invasion, templar of various races were trained from Silver Hand knights and recruited into the Silver Hand by Commander Born. 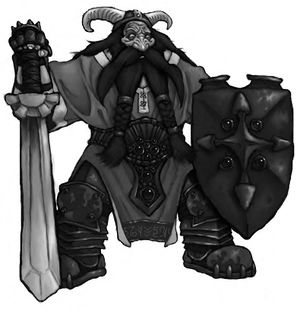 Argent Dawn Templars (or simply Templars) are devoted followers of the Holy Light who have chosen to cast away the traditions of the past to find the best ways possible to fight the growing forces of darkness in the world. Like Paladins, Argent Dawn Templars often oppose demons and undead, but Templars learn to use the Holy Light to strike against other forms of evil with equal potency.

To aid in the seemingly impossible struggles against the Scourge and the Burning Legion, the Templars study all forms of combat, and they find powerful and unique uses for the Holy Light. These unique abilities carry a price, however. As an Argent Dawn Templar delves deeper into studies of the Light, he abandons his old teachings and connections to the world. Many Templars sacrifice much of their wealth in their continuing battle against the forces of darkness in the world, but the greatest are more greatly transformed. Former Paladins cast off their plate armor or even abandon their old powers in favor of the new secrets they uncover. Some observers claim that the eldest Templars require such sacrifices from their disciples; others believe that the secrets these Knights discover somehow drives them away from their former lives and powers.

These few who know of the Argent Dawn Templars speak of strange and mysterious rituals the knights perform in search of new and greater powers. While a few of the Church of the Holy Light's most traditional Paladins and Priests condemn this unusual behavior, none can dispute the Templar's effectiveness. Rumors abound of Knights powerful enough to shield themselves from any form of harm, or to banish a servant of the Burning Legion from Azeroth in a single strike.

The Argent Dawn Templar gains the ability to change divine spell energy into holy lightning, manifesting it as a blast of silvery light. In addition, the Argent Dawn Templar may also gain a distinguishing mark. Examples of distinctive marks are runic tattoos, glowing eyes (usually a metallic color), or the loss of all hair on the body.

Argent Dawn Templars see their group as a small silver light shining in the darkness of the world around them. Templars see corruption in their homes and many other organizations, including the Knights of the Silver Hand and the Argent Dawn. While the Templars see Paladins as allies and vice versa, Templars feel that the Silver Hand overemphasizes tradition and order over general goodness and other values of the Light. Templars are virtually unknown in the world as a whole, although the Argent Dawn itself is widespread. The few Templars form a close-knit and elite group, often serving as leaders for groups of Paladins and Priests without revealing their unusual paths.

High-ranking Argent Dawn Templars initiate all new members, typically after the aspirant completes a difficult quest or achieves a considerable goal. The Argent Dawn's leaders study and train potentials carefully before they accept them into the elite section of the Argent Dawn.[2]