Temple of Ahn'Qiraj is a 40-man raid dungeon located in Ahn'Qiraj: The Fallen Kingdom. It was released with patch 1.9 during a massive server-dependent event called the Gates of Ahn'Qiraj.

At the heart of Ahn'Qiraj lies an ancient temple complex. Built in the time before recorded history, it is both a monument to unspeakable gods and a massive breeding ground for the qiraji army. Since the War of the Shifting Sands ended a thousand years ago, the Twin Emperors of the qiraji empire have been trapped inside their temple, barely contained behind the magical barrier erected by the bronze dragon Anachronos and the night elves.

Now that the Scepter of the Shifting Sands has been reassembled and the seal has been broken, the way into the inner sanctum of Ahn'Qiraj is open. Beyond the crawling madness of the hives, beneath the Temple of Ahn'Qiraj, legions of qiraji prepare for invasion. They must be stopped at all costs before they can unleash their voracious insectoid armies on Kalimdor once again, and a second War of the Shifting Sands breaks loose![1]

Dark whispers ride on the winds of Silithus desert. An old god stirs in his wretched lair and the entire world shall soon be the target of his wrath. After thousands of years of slumber, the old god, C'thun has awakened and is quickly regenerating his power. Once he has reached full potential nothing will be able to stop him. The dragons that so humbly sacrificed themselves so long ago to imprison C'thun are weakened or enslaved in the temple, so the charge of protecting the land falls to other heroes.

Heroes must enter Temple of Ahn'Qiraj, challenge C'thun's most wicked servants, and slay a god. The road will not be easy and it is wrought with peril at every turn. Will the heroes turn back now or face C'thun in his mighty lair and put an end to him once and for all?[2]

None listed, everywhere is just "Ahn'Qiraj"

The Temple of Ahn'Qiraj scales more in difficulty than other instances. The first few bosses are on par with the harder bosses in Molten Core and the last bosses are harder than anything you find in Blackwing Lair.

Nature resistance is particularly important in this instance for a few bosses. Equipment is important, but the earlier encounters will be possible to beat with sheer wits and strategy. Nature Protection potions are clearly of use here.

There is no key required to enter the Ahn'Qiraj temple instance. Upon going through the Scarab Wall gate in southern Silithus, follow the path to the right to the instance portal. 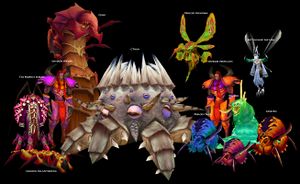 The loot in AQ40 comes from:

Players must collect ten scarab items of a certain type, two stone idols of a certain type, and a single Qiraji item. When a player has the appropriate collection for a particular item and a certain level of reputation with the Brood of Nozdormu, they can turn them in for the item.

See : Temple of Ahn'Qiraj Quest Loot for a full list.