The Temple of Earth 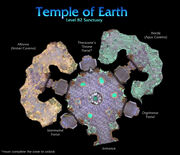 The Temple of Earth is a temple in the center and lower shelf of Deepholm. It was here, in the Stonecore, that the Twilight's Hammer brought Deathwing back to full health and forged him new armor. A titan-made stone called the World Pillar was kept inside. This item bore the weight of all the elemental and magnetic forces in Deepholm. When Deathwing became fully healed, it was he who destroyed the pillar, causing the Shattering. Now, the Earthen Ring work in desperation to recover the fragments of the pillar and restore the temple. All of Deepholm would collapse into Azeroth if the World Pillar is not put back together.

Temple of Earth has a main sanctuary chamber and two auxiliary faction chambers, in addition to small alcoves for a portal to Orgrimmar and Stormwind.

All NPCs in this sanctuary chamber are members of the Earthen Ring.

This cavern is primarily for Horde players. This chamber is not a sanctuary and players can attack members of the Alliance here.

This cavern is primarily for Alliance players. This chamber is not a sanctuary and players can attack members of the Horde here.

There are 3 major factions in Temple of Earth. These are:

Getting to Temple of Earth

Alliance players can speak with Naraat the Earthspeaker in northeast Stormwind, and Horde players to Farseer Krogar in northern Orgrimmar, and accept the quest

[82] The Maelstrom. Both NPCs will open portals to the Maelstrom where players can speak to Thrall to gain entry into Deepholm.

Once players gain entry into Deepholm they can travel back and forth between their faction portal and Temple of Earth.