For the scenario, see Temple of Kotmogu (scenario). 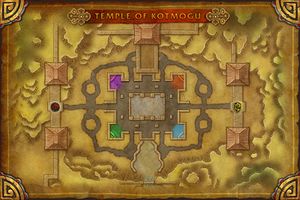 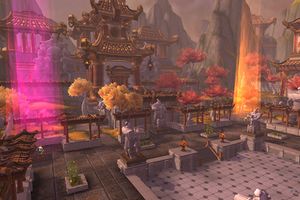 The temple itself, with two orbs waiting to be claimed 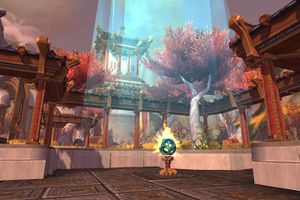 An orb of power on its pedestal 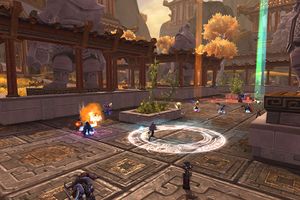 Battle amid the outer temple

Temple of Kotmogu is a 10vs10 resource race battleground for level 90 players, introduced in Mists of Pandaria. Located in the Vale of Eternal Blossoms, the objective of the battleground is to hold orbs of power for as long as possible, accumulating points but taking (and dealing) more damage the longer you hold it.

During the lost days of ancient Pandaria, the ruling mogu built temples not unlike themselves – immense in size, vast in scope, and steeped in forces as old as the ground beneath their feet. Stony statues of the mogu still glare down from their long-vacant temples, and echoes of their supremacy persist to the present day. Inside the autumnal Temple of Kotmogu, a vicious melee has erupted over artifacts the mogu left behind: treasures older than the bloodlines of human kings and the clans of orcs, orbs of power that have bathed in the energies of Pandaria for ages. Will they bring the might of the mogu to the Horde or Alliance?[1]

The struggle to absorb the power of ancient mogu artifacts begins with entrants to the temple outside its gates on opposed sides. At the beginning of the battle, each faction’s group will burst through the gates and rush to claim the orbs that appear in the four corners of the temple.

Once you or your teammates have retrieved an orb, hold onto it as long as you can; continuing to hold an orb will net you a steady stream of points.

Protect the orb holders on your team from the attacks of your enemies – they earn a significant amount of victory points! Also, be sure that your team strikes at the opposing team’s orb carriers for the very same reason.

Victory in the Temple of Kotmogu is determined by success in capturing and holding four powerful mogu orbs. The four orbs (green, blue, purple and orange) wait in four corners of the map.

Holding an orb earns your team victory points for as long as it’s held – but the power radiated by the orb also grants you the aspect of the mighty mogu, enlarging you to make you a clear target for your opposition. Orb-holders deal and receive increased damage, and the healing they receive is reduced. These effects are minor at first, but they increase quickly over time while the orb-holder lives.

A player can only pick up one orb at a time (though multiple teammates can pick up multiple orbs); holding an orb also prevents you from using your mount. If you’re slain while holding an orb, it will be returned to its point of origin inside the temple.

Holding an orb in different parts of the zone will net your team differing amounts of power, represented as victory points. Stay in the center of the map to earn the most points – the surrounding plaza earns slightly fewer, and holding an orb outside of the temple even less (though you’ll have more room to maneuver). The farther you are from the heart of the temple, the fewer points you’ll earn.

Delivering a killing blow to one of your enemies will net your team a significant number of victory points.

The Horde and Alliance wage battle for the ancient Mogu artifact that is foretold to hold great powers. Temple of Kotmogu is a 10 vs 10 Powerball battleground where each side attempts to control the Mogu artifact for as long as possible in different scoring zones.