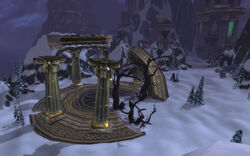 is situated in the center of the Plain of Echoes, just to the north of Camp Tunka'lo, in the northeast reaches of Storm Peaks.

This temple was the post of Keeper Freya until Loken started his rebellion against the other titanic watchers. Today, she is absent. It is said that evidence indicates a significant battle and that the opponent of Watcher Freya was estimated to be of similar size and strength to Watcher Freya (presumably Loken himself, though there is no clear indication of who Freya's opponent is/was). Temple guardians are no longer present and plant forms associated with the temple are deceased.

Freya can be found as a boss in Ulduar.